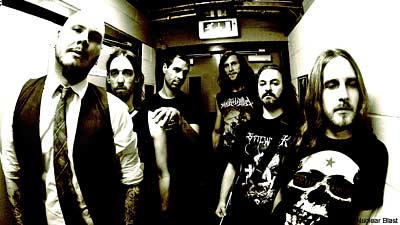 Soilwork's eighth album 'The Panic Broadcast' marks the return of guitarist Peter Wichers. Since Wichers exited the band due to feeling he couldn't top what the band had done prior, it was crucial that this new album didn't repeat any patterns.

"We wanted to do a record that felt spontaneous yet genuine, not just using the formula that has worked in the past. We challenged ourselves," Wichers told Noisecreep. "In the past, we focused on that one song that could get radio airplay. We gave that a good shot, but it never 'happened.' So we were going to write what we felt is awesome and not focus on length and make sure the songs are interesting all the way through -- and not compromise to keep the length at [three and a half mintues]. I felt like that was one of the major differences."

Other differences and improvements on 'The Panic Broadcast' include extended verses, which is new for Soilwork. "We hadn't done that before and we are bringing back older elements," Wichers, who lives in North Carolina and is a transplanted Swede, said. "Also, with guitar solos, the problem we had [was] not working on what's behind the lead. It's usually just straight chords and then someone shreds for a minute. But if you write a specific part for the lead underneath, it's more interesting than people who just like a shred. Girls don't just love guitar solos!'

Like Wichers, much of the band splits time between the U.S. and Sweden and doesn't live in Sweden full time when not touring. Wichers feels like a resident of the U.S., too. "I am used to how it works here, so I am Americanized," he said. "When I go home, it's like, 'What do you mean the grocery store closes at 8? I can't get a burger at 2 AM? It's the convenience factor. You get used to that, and you can't beat the weather here compared to Sweden."

'The Panic Broadcast' is out July 13.