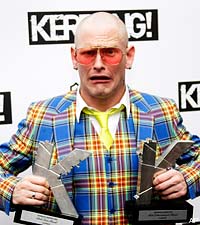 Slipknot frontman Corey Taylor has made a startling revelation in a new interview, claiming that, following the departure of Scott Weiland, he tried out for the open frontman slot in Velvet Revolver, the band featuring former Guns N' Roses members Slash, Duff McKagan and Matt Sorum.

Not long after Weiland was fired from the band in March of 2008, Velvet Revolver started looking for his replacement. According to reports, Lenny Kravitz once tried out for the frontman slot, as did Spacehog's Royston Langdon and Linkin Park's Chester Bennington. Now, Taylor's saying he, too, tried out for the gig.

"I had a meeting with those guys, we did some demos together, and it just didn't work -- for whatever reason," Taylor says. "It was just really cool. It was one of those things where it's like I could have got to jam with legends, man, in my opinion. But, you know, it was cool, and I still know those guys, I still hang out with them, and I still have nothing but respect."

According to reports, Slash was asked several months ago by the webmaster of his official fan site whether there was any truth to the rumor that Taylor was going to be the band's next singer. Slash replied "it looked like it for a minute, but they had decided against it."

Of course, Slipknot's a force to be reckoned with, so it's unlikely Taylor would have left the band had he gotten the gig. Taylor is also busy with his other project, Stone Sour.

Slipknot will be taking the stage at the Palms Casino and Resort in Las Vegas on Halloween.