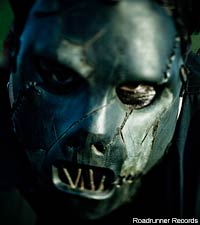 This year marks the 10-year anniversary of Slipknot's self-titled debut album for Roadrunner Records. Although an early version of the band independently released an album called 'Mate.Feed.Kill.Repeat' in 1996, it was their 1999 record that turned the metal world upside down.

Armed to the teeth with unforgettable tracks like 'Wait and Bleed' and 'Eyeless,' Slipknot's self-titled album is a study in tension, fury and sheer might. The band might feature nine members but their focused songwriting and tight musicianship has made their boundless arrangements feel seamless.

Noisecreep spoke with #2, aka Paul Gray, about the album's anniversary and as you'll read, the bassist is very appreciative of the career Slipknot has had so far.

Slipknot is celebrating the anniversary of the self-titled album's release. 10 years later, what do you remember most about that time period?

Let me just say that this entire ride has been great. The first album changed my life 100% dude! Before it I was homeless and just scraping by day by day. Just the fact that I can live off of music now is way beyond amazing. I remember being the death metal guy who would go to shows and dream about being in a full time band. Back in the early '90s, the scene was so underground so just getting signed to a label like Roadrunner was huge for me. But before the self-titled album came out, most of us were in financial debt.

Didn't percussionist Shawn Crahan help the band out financially before things really took off for the band?

He absolutely did dude! He was a little older and had more money than us, and I also remember Shawn's wife had a really good job. So yes, we got funded by them back in the day (laughter). We all struggled financially at that point. There was a period where I lived at Corey's house. I crashed on his couch actually (laughter). I worked at a bar, too, but it's not like I was making great money or anything. We would just get odd jobs to survive but we were focused on the band.

Every band signed to a bigger label like Roadrunner Records has a chance of breaking through but did you ever think you would do so well?

We never thought we would sell as many records as we have. I mean, we did know were doing something great but things have gone so much better than we expected. Slipknot's fanbase has been so supportive of what we do so we are lucky in that regard. These have been the best 10 years of my life. Not only have my musical dreams come true, I also met my wife this past decade so there's nothing to complain about.