With two popular albums already under their belt, alt-rock rising stars Sleeping with Sirens have been one of the most talked about groups we cover here on The Creep as of late. If You Were A Movie, This Would Be Your Soundtrack, the band's new 5-song EP, debuted at #1 on the iTunes Rock Charts. The group's fast-track success can be traced, at least in large part, to the charisma of its dynamic frontman, Kellin Quinn.

Sleeping With Sirens recently wrapped up their main stage stint on the Warped Tour and with Quinn resting at home for a few weeks, Noisecreep decided to call and catch up with the singer.

Kellin, what did you think of the fan reaction to the acoustic record so far?

I'm happy with it but not too super surprised that our fans would like it. At the beginning of our career, we did a lot of acoustic shows after our actual live concerts and there's a lot of acoustic videos floating around YouTube. Also, we've had requests for that kind of acoustic album for a while so yeah, I'm really pleased and not too shocked [laughs]. It was also a really awesome recording experience. It was really laid back and I got to do a lot of fun things with my voice that I don't always get to do on our harder albums. I also think it was a really good step for us to grow up a little bit and start going for a more mature sound for our third record. There's a thin line between doing too much too quickly and staying the same. But I think the acoustic album was a key thing for us; the right album at the right time.

You seem to have a very tight bond with fans.

Definitely. And it's great, but it also gets harder as our fan base has grown. I know some fans start to feel left out in some ways, which gets hard, it's too insane to think abut being able to respond to every single person as we grow and figure things out a little more. We want to make sure fans get their money's worth when we play live and so we do whatever we can. A huge thing for me growing up was going to see my favorite bands and feeling like, okay, cool, they proved themselves and did things in a special way. That's the most important thing.

Did you like meeting favorite bands when you were younger?

If it happened it was just icing on the cake. It was not like it is today. I think fans going to concerts expect more today in terms of meeting and things. It's cool, I get it because of how the internet has made things much more personal for fans to follow with Facebook, Twitter and everything, but I also think it's kind of hindering because it takes from the music in a way. When I went to shows with my friends, it was all about the experience with my friends. If I met the band it was cool. But it was more about talking about the memories of the show with my friends. And I sort of miss that with kids, because many people want to get to know the band and go to dinner with the band and hang out on the bus and all – and then you lose the mystery of the band a little. It's my job it to get up and play music on the stage and to make a connections with the kids that want to hear it the music. I try my best to make it a great experience when someone wants a picture or an autograph, but I think as an artist it's still important to have that sense of anonymity so there's some mystique about what we do.

You've got a rare, nearly two-month break right now at home, how will you be spending your time?

Spending lots of time with my daughter. She's three months now, so she is starting to notice things and make and these cute noises and so quality time with her is super important to me right now. Also, it's time to get some ideas with Jessie, our guitar player, for the new album and get that going. Gearing up for the new album is something I need to spend a lot of time on.

Do you think being a new dad will factor into what you write or greatly affect your creativity?

I'm sure it will do something. But I don't think you'll hear lullabies on the new album [laughs]. Usually, since I don't have a lot of pain or a ton of conflict in my life, I look around and learn from people when I write. I look to fans and friends and other things around me. I like to write about things that don't reflect exactly on my life. On "A Trophy Father's Son," from the second album, a lot of people think that might be about me and relationship with my dad. There might be a little of that, but mostly it's more about how other kids go through life and deal with divorce. Creatively, it might give me some cool things to write about fatherhood, but in a less detailed way. You know, more underneath the seams. 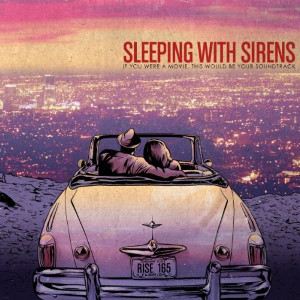 Sleeping With Sirens' new EP, If You Were A Movie, This Would Be Your Soundtrack, is available now on iTunes and Amazon.