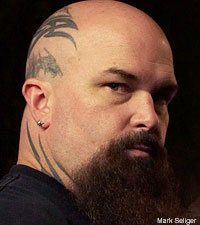 Like their authoritative blasts of thrash metal, the members of Slayer aren't the kind of folks who like compromise. That's why when they chose to work with super producer Rick Rubin again on their new album, 'World Painted Blood,' some metal eyebrows were raised. Though he's produced some of Slayer's most beloved albums, the group has complained about him in the past. Rubin executive produced the new record, with Greg Fidelman acting as the main producer.

Another controversial aspect of 'World Painted Blood' is the track 'Americon.' With lyrics like, "with our callous minds we infect, other ways of life no regrets," it's easy to believe some of Slayer's fans might take the song as anti-American.

Noisecreep spoke with Slayer guitarist Kerry King and asked him about their decision to work with Rubin despite their rocky past together, and whether or not he's gotten heat for writing 'Americon.'

You were critical of Rick Rubin during the 'Christ Illusion' campaign, but I see his name on the credits for this record again.

We obviously have a long history with Rick. We've done great records together. There's just this misconception the public has about him. People think that Rick is sitting in the studio and working on everything with us, but that's so not true. In fact, I haven't been in a recording studio with him for well over 10 years. He's worked with everyone from Johnny Cash to Danzig and a lot of other big names, so you know he's great at what he does. But the guy is busy doing so many things at once. Like you said, we have very strong personalities, so at the end of the day, if we don't like an idea, we ain't putting it on a Slayer album. I don't care who tells me different.

You and the other guys in the band seem to have very strong personalities. You also hired Greg Fidelman to sit in the producer's chair but, how much of an impact does he have on the final product?

Look, we've been doing this thing for a long time now. At this point in our career, we know how things should sound. Greg is great at what he does, and he's there more to help us make sure we explore all of the possibilities. He'll see that all of our ideas get tried out for the songs. Greg sometimes is like the fifth member of Slayer when it comes to that. He also has great ideas like on 'Americon.' He had an idea to throw in an octave in one section, and it really filled out the track. That's why it's good to have an extra person in there we trust.

'Americon' is critical of our policies here in the States. Are you worried about a backlash from your more conservative fans?

I've already gotten some of that crap (laughing)! I've gotten the whole 'Kerry King is un-American' bulls---. I wrote the song from another perspective, which is being lost on people. I'm in a position of travelling around the world and seeing the United States from another angle. People are ignorant about that kind of stuff. They think it's all about what they see here, but when you go around the world, people see us differently. I'm the furthest thing from un-American, so people need to relax.