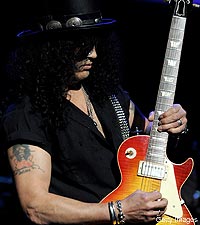 Guitar god Slash recently opened up about the current state of Velvet Revolver. Back in 2008, Slash and the rest of Velvet Revolver announced a split from singer Scott Weiland. Turns out, things were not exactly rosy in Revolver land, and Slash blames a lot of the troubles on chemical dependency.

"Velvet Revolver was intended to be a lot of fun and we started off having a great time, but I think that we all had a lot of chemical issues as that thing wore on," Slash says in a recent interview with Spinner. "I definitely went way down the f---ing drain for a minute there after the 'Contraband' record came out and we went on tour for two years."

Eventually the band members got sober and recorded 'Libertad,' but began to drift in different directions. Eventually, Weiland left to rejoin Stone Temple Pilots. Despite a perceived public feud, Slash says no ill will exists between the remaining members of Velvet Revolver and Weiland.

Slash continues, saying, "I still love the guy and there's not really any hard feelings about the whole thing. I even hung out with him recently. It's definitely not like the Guns N' Roses situation, which is f---ing deep and nasty, this is no big deal."

Velvet Revolver will continue their search for a new lead singer next year.