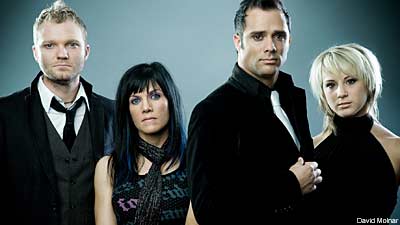 Christian hard rockers Skillet came back in a big way last year with the release of eighth album 'Awake,' which debuted at No. 2 on the Billboard 200 and spawned hit single 'Monster.' The Memphis band plans on keeping that momentum going in 2010 with a year of touring, including a stop at the Rock on the Range Festival in Columbus, Ohio.

Skillet vocalist-bassist John Cooper sees the festival, which will feature Rob Zombie, Godsmack, Three Days Grace and many others on May 22 and 23, as a unique opportunity to spread the band's influence. "Most of the people at Rock on the Range have never seen Skillet play before," he tells Noisecreep. "It's intimidating to start over with a new crowd, but we're overwhelmed by the excitement of winning new fans."

The band has been winning over crowds since its formation in 1996 and has settled into its new lineup with drummer Jen Ledger, who joined in 2008. Cooper says that Skillet's recent in-person appearances at radio shows across the country, as well as the band's tour last month with Shinedown and Puddle of Mudd, helped them snag the spot at Rock on the Range.

While he describes the Shinedown tour as "wicked awesome," he admits that it was strange playing in front of people "who looked at each other during 'Monster' and realized that we were the band that played that song."

Skillet will switch gears this spring when the band kicks off its Awake Tonight Tour with Christian rap/rock artist TobyMac on March 4. While the two acts have trying to coordinate a tour for years, they were finally able to set up a string of dates together after Cooper contributed to the title track of TobyMac's new album 'Tonight'

"We have two different sounds and slightly different audiences, but I think that will work in our favor," says Cooper. "Hopefully there will be a demographic of ages 7 through 50 in the crowd."

Skillet has tour dates scheduled across North America from now until September.