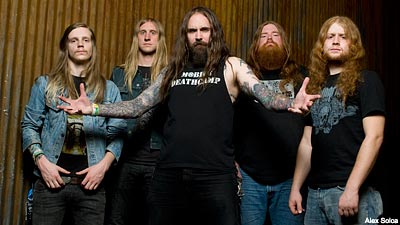 Skeletonwitch just released their third studio album, 'Breathing the Fire,' and already the blogs are chiming in with praise. MetalSucks writer Vince Neilstein lauded the record while premiering the band's video for what is also his favorite track, 'Repulsive Salvation,' and was in attendance when David Brodsky directed its video shoot in Brooklyn last month.

Behind-the-scenes footage was posted about two weeks ago, but the music video itself is finally done and up. It features the fivesome in the Lucky 13 Saloon, which is the kind of place you'd hear Skeletonwitch and a vast variety of other metal and rock bands on any given night. Neilstein says the band "rocked out to the track over and over like their careers depended on it" while he rocked out with $1 beers. Hey, thrift is metal, too.

Skeletonwitch have plenty of North American tour dates lined up, so they should be coming through your town, ready to shake the walls on your own local venue.