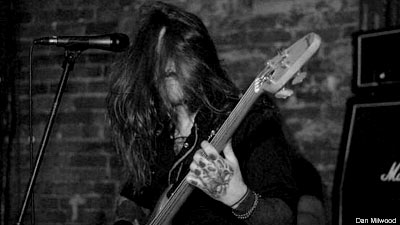 It's been a long few years for former Skeletonwitch bassist Eric Harris working to assemble his post-'Witch plans after relocating to Los Angeles unexpectedly late in the summer of 2008. Sure, a few plans didn't pan out, but Harris has stepped up to the mic -- with bass in hand -- and established Gypsyhawk, an L.A.-based band intent on recounting and representing the elements that made metal so enjoyable in its infancy: twin guitars, melodic vocals, killer grooves and solos. Lots of solos.

Now with a handful of shows under their belt, Gypsyhawk are hard at work and hunkered down at drummer Joe Fabio's home studio, tinkering with material that will make up the band's debut effort. Just don't expect another frostbitten blend of thrash and black metal like Harris played during his time in Skeletonwitch.

Sounding like something of a spawn of Thin Lizzy or a keyboardless Deep Purple with a touch of Motörhead and just the right number of beers before hitting the stage, Gypsyhawk -- rounded out by guitarists Andrew Packer and Scott Conant -- played through a handful of songs they were in the process of recording for the band's debut, several of which are now available as rough mixes online a few times throughout December. 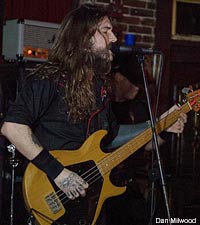 At one of the band's most recent shows, Dec. 13 in Pasadena, Calif., Gypsyhawk proved their professionalism alongside more heavy-minded bands the Abominable Iron Sloth and Armed for the Apocalypse, who were on tour with each other and almost certainly cite a series of different inspirations for their respective sounds.

Put on by SoCal booking group Ear Splitters, the diverse lineup saw Gypsyhawk playing before the two touring bands, but after another local band. Lo and behold, though, the band's wall of amps on the cramped stage at the Old Towne Pub was the most impressive stage show for gear. But their live show backed up it accordingly, too.

A decided departure for Harris from his days on the road with Skeletonwitch, Gypsyhawk's sound is spawned more from the bands that inspired what metal would eventually become: more UFO, Iron Maiden or Uriah Heep than Metallica, Immortal or Meshuggah. With an uncanny knack for melody and a heavy-handed arsenal of original tunes that would do their forefathers proud, Gypsyhawk seemed to impress the crowd that squeezed into the Old Towne Pub between the stage and the bar, no small task.

If that turnout was an indication of what to expect for the band's next gig, at the decidedly bigger (and ritzier) Les Deux in Hollywood for an upcoming Feb. 8 rendezvous with friends, and fellow melody mongers Holy Grail and Professor, then crowds should be captivated.

And speak of the devil, Gypsyhawk band has booked two more shows before the month is out. Apparently, hitting the ground running isn't a big deal for these cats.