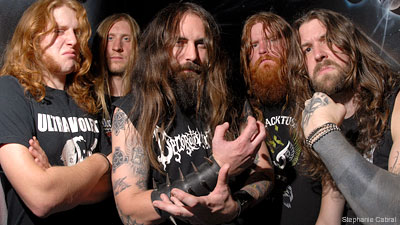 Later this November, blackened metallers Skeletonwitch will take Europe by storm with a co-headlining tour alongside Goatwhore and Toxic Holocaust.

Though the announcement comes while the 'Witch are currently on tour stateside with Children of Bodom and the Black Dahlia Murder, guitarist Scott Hedrick shares his excitement for the forthcoming trek, exclaiming, "Hell f---ing yeah! We couldn't be more stoked to announce our European dates with Goatwhore and Toxic Holocaust. We've been wanting to get back across the pond for some time, and who better to do it with?! We've logged a lot of hours and shared a few thousand beers with both of those bands on the road already. Great f---ing people, great f---ing bands."

'Breathing the Fire' is out on Oct. 13 through Prosthetic Records. The album was recorded in Seattle by producer Jack Endino (High on Fire, Nirvana) and mastered by Scott Hull of Pig Destroyer/Agoraphobic Nosebleed fame.