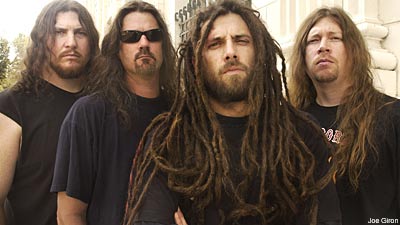 Even though 'Graveyard Classics 3' is being released on Jan. 19, Six Feet Under's Chris Barnes isn't too sure that a fourth edition is in store or on the docket. "I don't know," the dreadlocked Barnes told Noisecreep. "There was a 'Friday the 13, Part IV,' so maybe. Sequels always keep going, I suppose. I'd like to keep it a trilogy, but we have a good time doing it, so you never know."

Barnes and his crew of death metal groove masters are on their third round of death metallicizing classic rock songs. "It's good for what we do with covers," Barnes says of the band's choices of what to offer their SFU rendition of. "Our fans are definitely going to dig our approach on the new songs. A couple of the artists we covered are ones that are fans have asked us to do. People that are into our music will dig and know where we come from. We had fun time making it."

Barnes is adamant, though, that SFU won't go the Children of Bodom route by covering pop fluff like Britney Spears or Andrew WK like Bodom's Alexi Laho is fond of doing. "If it sounds cool with our style of music, we do it," Barnes said. "We do songs we enjoy ourselves, but we don't find this to be a novelty. We enjoy this. I don't know where other bands come from, but we do covers of music we like. That's our starting point."

So it's safe to say there won't be any Taylor Swift or Celine Dion send-ups on the possible 'Graveyard Classics 4.'