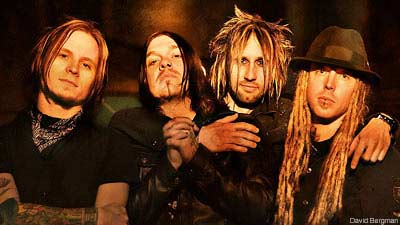 Shinedown will headline the first-ever Carnival of Madness Tour. The band will play 30 dates all over America and will be joined by Chevelle, Puddle of Mudd, Sevendust, 10 Years and two other bands still to be named. All the bands on the bill share the same management group, and both bands and organizers promise a completely new concert experience.

"I think this tour is going to be very prevalent in the summertime," Shinedown singer Brent Smith tells Noisecreep. "It's not like Crüe Fest, and we won't always be an anchor. The reason it is called 'Carnival of Madness' is a kind of tip of the hat to us because of [our album] 'The Sound of Madness.' It won't be like Ozzfest of Crüe Fest or when Disturbed did 'Music as a Weapon' or Mayhem Fest or even Warped Tour. When you get into the festivals where you get like 20-plus bands, it can be a mind-altering deal. I'm not a big fan of the 20-band festivals. It's a long damn day."

Don't worry, though. Carnival of Madness still promises a ton of music. In all, Smith says fans will hear six hours of rock.

While the members of Shinedown are actively working on a new album, Sevendust just released 'Cold Day Memory.' The Carnival of Madness Tour will allow Sevendust to perform their new songs for fans from all over.

"I'm really excited for the summer, period," Sevendust vocalist Lajon Witherspoon tells Noisecreep. "We can't wait to play with our brothers in Shinedown and Puddle of Mudd. In a sense, we've grown up together. 10 Years! We love those guys, too! I just look forward to an exciting tour, and I think it's the kind of tour where people can come out and really get their money's worth."

Smith says Shinedown's stage show and backdrop are top secret -- but admits the festival will result in his band's biggest production effort ever.

"The 'Carnival' show is the biggest production we've ever brought. It's massive. There's two curtains. Once the last curtain drops, it's pretty insane what's back there. What's back there is something ... it's been seen before, but it's not been seen in this originality. It's very original how we've designed what is going on. It's something to give back to everyone who has supported us. We've wanted to give everybody a big, big show and that's what we're going to do!"

The Carnival of Madness will be an annual event and bands will change and there is a possibility of making a winter and summer version of the tour. You can visit the official festival website for more information and to purchase tickets.