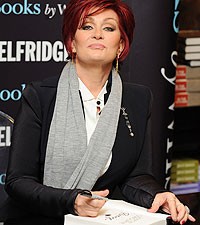 Ozzy Osbourne told a roomful of reporters and contest winners at Toronto's gothic-styled castle Casa Loma yesterday that his wife is responsible for choosing the acts on this year's Ozzfest. He had been talking about his forthcoming album, 'Scream,' but Sharon soon emerged to answer any deflected questions.

"I felt that after we did three Ozzfests that it was time to take a break," says Sharon. "And then when you take your break, it's like you stay away for a year and then your spot's filled with other festivals. They come in and take your place, and then the competition gets more and more, which is healthy; it's natural.

"But coming back out this time, it was like, 'Whoa!' It just seemed to me that in the space of two years everybody wants to be something else -- and everybody still wants to be bloody alternative," she scoffs. "Or, um, hard rock. 'We're not metal. We're not metal, no no no.'

"Going to Alice in Chains, who are really good friends of ours and a great band, they're 'too alternative' for us. That's why they took Papa Roach to support," she deadpans. "So when you're dealing with people that think like that, it's very hard [laughs] to put a tour together, but I think we did extremely well at the end of the day. It's more of an event with what we've put together."