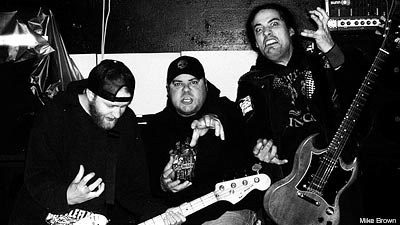 Mere moments after Noisecreep found out about Northwestern destroyers Shadow of the Torturer, hungrily devoured the music on their Web site and gotten mega-stoked on their monolithic cacophonies, we were confronted by rumors that the band had already broken up. Naturally, our black little hearts were crushed. What cruel joke had the metal gods played on us?

Thankfully, guitarist/vocalist Mike Brown cleared things up for us. To paraphrase a great mustachioed man, rumors of Shadow of the Torturer's demise have been greatly exaggerated. "At first that was the case, but why should I sack all this excellent material at some other person's whim?" Brown exclaimed. "That is totally untrue. SOTT has risen! There will be a re-release a split seven-inch and an entirely new full-length! Then maybe we'll wuss out."

Shadow of the Torturer hooked up with the sludge barons at Blind Date Records to unleash a strictly-limited vinyl version of their debut LP, 'Marching Into Chaos,' which is already in danger of selling out. How does a band from Portland end up working with a specialty vinyl label that runs out of Germany?

"I began communication with Blind Date when my former band Aldebaran's 'Dwellers in Twilight' was released on vinyl by Marcel via Tim Call. I put our former bassist Isamu in touch with them and BD put out HC Minds' 'Beginning of the End' album. I was fortunate enough to have played guitar and sang a few tunes on that record. Then I sent Marcel some SOTT Demos and he basically inspired me to keep trying with the project, so I did. The time difference thing isn't a problem. It's actually kind of cool!" Brown explained. "I have always been a huge fan of German metal like Coroner, Kreator and Destruction, so I was thrilled that Germans could buy our disc locally. We want to tour Germany!"

He went on to divulge a few final details on Shadow of the Torturer's next steps into the abyss and said, "We are rerecording [Feb. 27]. It will be released first on CD and may even be up to 60 minutes long with some surprising and bleak new tunes, including 'Yaks of Sodom,' as well as a bonus cover tune. We want to give something back to the kick ass people who have been rooting for us and since the cost of making a CD is cheaper than vinyl, we will be able to sell and give away CDs on tour this spring. We are thinking of calling our upcoming tour 'The Chronicles of March.'"

Vinyl aficionados take heed. "The limited press of the Marching into Chaos vinyl will not be pressed again for respect of [former members] Isamu and Gabe, though we will opt to put this new release on vinyl at a later date!" Brown promised. Those willing to brave the band's merciless down-tuned onslaught, take heed -- Shadow of the Torturer are coming for you.

"We want to book a small west coast spring tour, and then we want Germany! Then maybe Canada in 2011," Brown said.