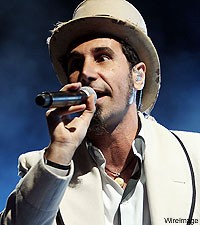 Noisecreep recently sat down with Serj Tankian at the Burbank, Calif. offices of his label, Warner Bros., where the System of a Down frontman turned solo artist turned orchestral composer filled us in on what's keeping him busy. Enjoying the freedom he has as a solo artist, Tankian is channeling his energy into numerous creative outlets, including a musical he's working on with Steven Seder, who did 'Spring Awakening.'

In this video chat, Tankian tells us the play is progressing, having had several workshops, and the work -- based on the Greek play 'Prometheus Bound' -- will open at Boston's American Repetory Theater in March 2011. "It's really interesting, it's somethig I've never done," Tankian says. "So it's like a whole different field."


Tankian also talks about the differing plans for the soundtrack, including possible cast records and maybe an instrumental score -- and why he'd love to hear Christopher Walken take a turn at singing one of his songs.