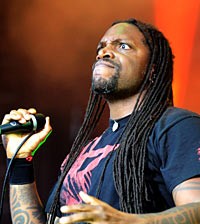 When Sepultura released their confirmed itinerary for their upcoming US tour -- along with details of a new album and other dates around the world -- they didn't realize that one thing needed clarification: this is not going to be a reunion tour. That means that founding band leader Max Cavalera (who now leads Soulfly) and his brother, original drummer Igor Cavalera, will not be joining the festivities.

The Cavalera brothers -- whom many felt were central to Sepultura's very identity -- had an acrimonious split from the band in 1996 after a bizarre series of events and personal tragedy ultimately left the other band members wishing to replace their manager, Gloria Bujnowski. Just one problem: Max was married to her.

According to NME, Max has made public statements lately that hint at the possibility of a full-on Sepultura reunion. His ex-bandmates, however, have said -- in less polite terms -- no such luck. Their plans for both their new album and ensuing world tour are already confirmed and neither of the Cavalera brothers' names are on the roster. Final answer.