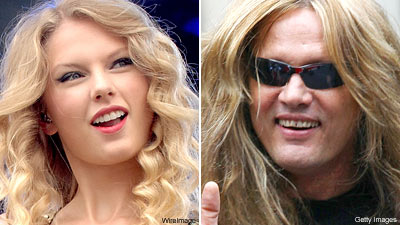 A year or so before Carrie Underwood covered Mötley Crüe's 'Home Sweet Home' for a Humane Society of the United States benefit single, the country star plucked another song from that metal era --- Skid Row's 1989 power ballad 'I Remember You.' She was just six years old when it became a top 10 hit on Billboard's Hot 100 chart and that year's most-played prom song.

Sebastian Bach, who himself has been dabbling in country music after appearing on CMT's 'Gone Country 2,' is floored after seeing her version on YouTube.

"One of the most ironic things ever in my career is that Carrie Underwood, for some crazy ass reason, has made 'I Remember You' a country rock hit," Bach says. "She does it in her concerts, a full production with backing vocals and string section, slide guitars and she does all the screams at the end.

"If you could have told me 20 years ago that 'I Remember You' would be a country rock staple -- which Carrie Underwood has made it, they play it on country stations along with her version of 'Home Sweet Home' -- it's just so crazy to me."

Taylor Swift is another country star that has been covering classic metal songs. On CMT's 'Crossroads,' country musicians are teamed with artists from other genres. That's how the 19-year-old ended up working with Def Leppard on their major hits, such as 'Pour Some Sugar on Me' and 'Photograph,' and the British band did the same for her songs

"There's this whole explosion in America that's going on, like Taylor Swift doing 'Crossroads' with Def Leppard. It's really no different than [country singer and member of Big and Rich] John Rich coming out with 'I Remember You' or 'Youth Gone Wild,'" says Bach.

"The difference between rock and country now to me is, number one, for some weird reason that I can never understand, rock 'n' roll seems to be this whole nostalgia trip now. I don't get it. Country, the focus is on one thing -- making new music. And the only thing I love more than metal is music," he laughs. "I like sitting down with somebody with a guitar and coming up with a melody line and some words and recording them."