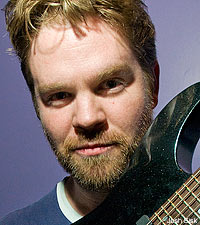 Scott Hull might be the hardest working man in underground metal today. Besides his heralded studio work mastering records by acts like Brutal Truth, Magrudergrind, and Suffocation, the guitarist somehow still finds time to write and record with grindcore juggernauts Agoraphobic Nosebleed and Pig Destroyer. The aforementioned ANb will be releasing their long-awaited album, 'Agorapocalypse' on April 14.

ANb's music has never been known for its subtlety and 'Agorapocalypse' won't change that. To add to their already huge sonic palette, the band has added Salome vocalist Kat to their ranks and her contributions to the new songs is immediately felt. If you thought ANb's older material was chaotic, you're in for a world of hurt. Despite Hull's whirlwind schedule, Noisecreep still managed to sit down with the guitarist to talk about the upcoming album.

You recently said that everything leading up to 'Agorapocalypse' felt more like a series of demos than anything else. That sounds dismissive. Do you think doing so many split releases and compilation stuff wore you thin in a sense?

Yeah, in a way we did. My main problem with 'Frozen Corpse Stuffed With Dope' and 'Altered States of America' is with the drum machine. I'm not sh*tting on those records because I think we did the best with what we had back then. I think a lot of people think I really wanted that machine gun sound, but I never really did. There just wasn't any drum machine that had dynamics until Drum kit from Hell came around. Also, the way we put together records was very quick and under-rehearsed. I'd have a large body of tracks recorded, Jay would bring some lyrics, and each vocalist would take a stab at arranging the lyrics on the fly. So I listen back to a lot of that and can't help but think it could've benefited from spending a little more time on it. I am much happier with how we approached 'Agorapocalypse.'

With every new Agoraphobic Nosebleed release you seem to throw in a new element to expand the sound. This time out the most obvious change is the addition of Kat from the band Salome as a third vocalist. What was it about her vocal style that made you think she would be a nice fit for the project?

Previous to Kat, all the vocalists in ANb have had this mid-range hardcore type sound. Kat's vocals are either VERY shrill or VERY low. So she fits in nicely around Rich's Tom Araya and Jay's DRI vocals. The way we thought about it wasn't "how is she going to fit into the band", but rather "how can this help redefine the sound of the band."

Now that you have three vocalists in the line-up, how did you go about choosing who sang what part?

I leave that all to Rich and Kat to decide. Rich's strengths are in the rapid fire hardcore tracks. I swear he sounds exactly like Tom Araya on some of the new songs. Kat's strengths are in the tracks that have more space, and are potentially more complex. Since Jay's not really around to work on this much, we wind up just weaving him throughout the record.

You recently posted "Agorapocalypse Now!" on your MySpace page and it definitely has a classic speed metal feel to it in some of the riffing. Can you talk about the some of the influences that might have informed this new album that maybe weren't as explored on your previous outings?

The single biggest influence for Agorapocalypse was one of my favorite records of all time; COC's 'Animosity.' You'll hear that in a lot of the tracks, but then you'll also hear some Coalesce, Eyehategod, etc. It's not that I was consciously avoiding grind records this time around. I just wanted to write songs that pushed us in a different direction.

Are there any specific songs on the album that you think might throw some people off? Can we expect any huge stylistic curveballs?

"Timelord Zero" is a total rock and roll song. "Timelord Two" is kind of a strange one for us too. My favorite moment in the new CD is the drum solo. I mean, I've already seen people bitch that there are only 13 songs on this thing so I know a lot of people will regard THAT as a huge stylistic difference.