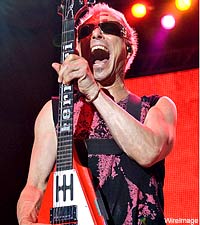 The Scorpions sent shockwaves throughout the hard rock community when they announced earlier this week that they would be retiring. In a statement on their official site, the German legends said they would be releasing a new album called 'Sting of the Tail' in March and then would be heading out on a tour that would span the world "over the next few years." Noisecreep had to get to the bottom of this and got in touch with guitarist Rudolf Schenker who shared some insight to the band's decision.

First off, why the hell are you guys packing it in?

We were sitting in the studio after we finished tracking 'Sting of the Tail,' and we realized something rather quickly. We heard these songs together, and it just captured the essence of the '80s Scorpions sound. It sounds like a combination of the best material on the 'Lovedrive' and 'Crazy World' albums. The songs have that feel and spirit. Then our manager had the idea to finish the band on a high note with this record. At first, we thought he was joking (laughter). But then we noticed he was completely being serious. And it turns out, he was right.

So you just wanted to end the band with a high note.

Yes, exactly. Look, we have been around for a long time, and we've done so many great things together. We came out of Germany when no one thought a band from there could rock hard. We've always believed in the band and had fun doing it. 'Sting of the Tail' sounds like a classic Scorpions album, so we decided to leave after we get done touring it since it's such a powerful record.

You've worked with outside collaborators like Desmond Child in the past. Did you do that again on 'Sting of the Tail'?

We worked with Eric Bazilian, who is a fantastic guitar player and songwriter. He used to be in The Hooters and has written some huge songs for other people, too. He's worked with us in the past and he becomes like our sixth member. We also worked with Mikael Nord Andersson and Martin Hansen. They are Swedish guys and really helped us capture that classic Scorpions sound. One guy is a great guitarist, and one is a sound engineer. The band obviously did most of the songwriting, but we definitely worked with some talented guys again.

People have been critical about the group's pop overtones throughout the years. Looking back at your catalog, do you feel like the band has had any missteps?

We experimented with our sound during some of the '90s. It was a bit strange for us in that period. All of a sudden you had alternative stuff and heavier bands around, so we tried to adapt. It was difficult for the band. In the States, it was especially hard for bands like us. The funny thing is that in Asia we got even bigger (laughter). Our records went many times platinum in countries like Malaysia and Thailand during the '90s.

On the 'Unbreakable' and 'Humanity: Hour I' album we brought our hard rock sound back. When 'Sting of the Tail' comes out, you'll see that we've stuck to that.