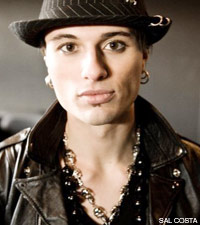 With the blessing of his bandmates -- bassist Micky (no last name) and drummer Mike P. -- he has joined Toronto's My Darkest Days, the latest Chad Kroeger's protégés and 604 Records signee in Canada -- not to mention a deal with Island Def Jam in America.

"They're a very talented group of guys," says Costa. "I love the tunes, and have for a long time. I was a fan of this band even before they asked me to join, but I pretty much came in after this record is almost done. They're still recording. Chad is producing, but I wasn't there for any of the songs."

Three Star Seed, which had just started getting some attention from the music industry, had played a bunch of shows with My Darkest Days and Costa had jammed a few times at their rehearsal space.

"I've known them from the scene," Costa says. "They've seen me play before. We've opened for them before, and it really just went like that. They were looking to add another person that can play some of the parts that they weren't able to do live."

Costa says his 3SS bandmates gave him the go-ahead "without a hesitation" and have since disbanded. "Micky and Mike were like, 'You have to do it, man.' It was crazy. I would never even have thought they would have done something like that, but they were totally stoked."

"Sal's my best friend and this is a crazy opportunity for him, I'm super excited for the dude," says Micky, who has been playing in various bands with him for nine years.

So is it tough for Costa, a born rock star, to give up the spotlight as the lead singer?

Costa doesn't know the plans yet for My Darkest Days, but he will be making his debut with the band at the El Mocambo in Toronto Oct. 2.