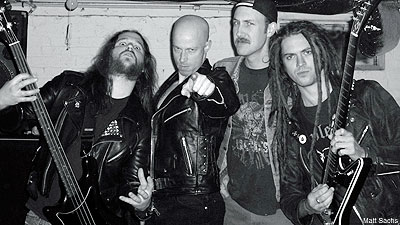 Municipal Waste guitarist Ryan Waste has formed Volture, who are in the process of recording the six-song 'Shocking its Prey' EP. He switches back to his roots as a bassist in Volture and allows guitarist Nick Poulos to take on the band's shred duties.

Two bands equals two jobs, albeit two fun jobs. Waste juggles the gigs thanks to his rampant passion for playing. "When you're passionate enough about something like I am with music, one has to make time," Waste told Noisecreep. "I always have riffs in my head and I constantly listen to music. If I wasn't consumed by it, I would be totally unhappy. I'm proud to have the opportunity to express myself through both bands so there's never a dull moment."

The seeds for Volture were sown in early '09, with the guitarist aiming to siphon his lifelong love for bands like Mercyful Fate, Judas Priest and Heavy Load into a proper project. The guitarist/bassist has no qualms that Municipal Waste fans will dig Volture. "I think the majority of them will," he mused. "The Waste has such a wide variety of people on board that are into heavy metal, punk, thrash, death metal and hardcore that you can't really put a label on one particular style they like. That's what makes our fans so unique. If you are truly into heavy music, or any genre of rock that falls under it, you should be able to appreciate Volture, because it all comes from the same place."

Waste, who admits he can cook well, has worked in restaurants and is known as 'Dr. Food,' which "means I enjoy eating so much that I earned a degree," met vocalist Brent Hubbard eight years ago, and the duo actually started a band in 2003 with Volture drummer Barry Cover, but things gradually fell by the wayside and one by one, everyone left the project. "That's the nicest way I could ever put it. Let's just say that was the past and Volture is the future," Waste said.

Volture will tour -- or is it 'ture'? -- in support of 'Shocking Its Prey.' But the live shows will be an occasion, since "it's not going to be like six-seven months out of the year or anything insane like that. This time around we want to be more selective and not burn ourselves out," Waste said.