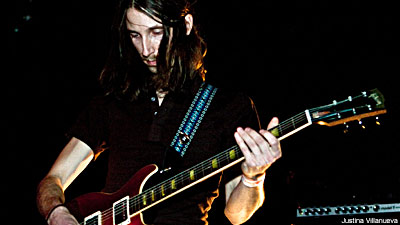 "F--- that song anyways. We got new s---. That was old. It was old," Russian Circles guitarist Mike Sullivan said as he scrambled to get his pedals working. He was stuck in a thick sea of the crowd's "Awwws" and "What happeneds?" The band headlined Bowery Ballroom for the first time -- but got off to a rough start when Sullivan's guitar went completely out only mid-song of the first song.

As Sullivan tried to quickly fix the issue someone screamed, "More reverb."

It came to the point where the guitarist had to run out to the van. He asked the sound guy to put music on while he ventured away to find a solution.

"One more song!" someone else shouted during the ultra early intermission.

But before we knew it, a security guard cleared a pathway for Sullivan to run back up on stage. And like nothing had ever gone wrong, the vocal-less three-piece resumed playing one hell of a rocking set. Their eclectic, Explosions in the Sky-meets-Pelican 'instrumetal' had a very full Bowery Ballroom entranced. In fact, their builds have the total payoff that you usually see at techno festivals, where everyone jumps up and down at the climax of a song.

Catch the Chicagoans on the road with Young Widows throughout December.