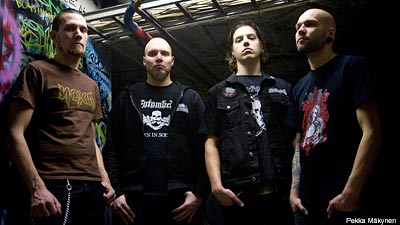 Rotten Sound, who've been grinding your mind since 1993, take on Napalm Death on March 30, when their new EP, 'Napalm,' hits shelves. In addition to three new Rotten Sound originals, the band covers Napalm Death's 'Mindkill' and 'Missing Link.' The EP will also feature a full live set from the Obscene Extreme Festival, so that's a whole lot of Rotten Sound.

"Napalm Death was one of the first bands that kicked my ass to start my own band and without Napalm Death, I would not have became interested in playing grind-core," guitarist Mika Aalto told Noisecreep. "Recording these three songs was our personal tribute to everyone who ever participated in Napalm Death and also one hell of a ride through the early years of the leaders of this scene."

Regarding the Rotten Sound originals, vocalist Keijo Niinimaa told Noisecreep that the band has gotten even faster! "The other side of the EP contains three ferocious Rotten Sound tracks, which we had written some time ago, but did not want to wait until the next album to release them," Niinimaa said. "It was a tough challenge to match the Napalm Death tracks, but I think we managed to capture also our own sound at its best: very rotten, in your face and certainly the fastest tracks we have released on this decade."