This past Saturday (Nov. 12), Noisecreep attended the finale party for this year's Rock 'n' Roll Fantasy Camp at the famed Playboy Mansion.

Earlier that day, Sunset Strip heavy metal kingpin Willie Basse left the final rehearsals for the finale performance, he knew there would be a killer show later that evening.

"I taught a master vocal class for a select number of campers on Saturday afternoon," Basse told Noisecreep. "And I will tell you what, these folks could sing. I taught them how to take care of their voices, how to breath better along with some other tips, and they all listened well."

For students at the Rock 'n' Roll Fantasy Camp, the experience was about to hit its climax as all of the bands would take the stage to play individual sets along with their mentor for the week. So at the end of Saturday's rehearsals they were whisked back to the hotel, then taken up to the famed mansion, which had been converted for the evening into a rock 'n' roll playground of sorts.

Camp instructors Kip Winger, Rudy Sarzo and Lita Ford, among many others, were on hand for the festivities.

The scene at the Playboy Mansion featured a seemingly endless array beautiful women, fine food and drink as campers mingled with celebrities, took photos, got autographs and prepared for their moment in the spotlight.

(Below: Billy Sheehan and Rudy Sarzo)

Fantasy Camp founder David Fishof enthusiastically roamed the grounds, meeting and greeting before taking the stage as emcee for the evening, which also featured a live auction and fashion show in addition to the concert.

And then it was showtime. One by one each band hit the stage, playing approximately 10 minute sets a piece. As well, each band would be joined for one song by Paul Stanley, who had a chance to sit in on several KISS classics as well as a handful of rock 'n' roll standards.

Chuck Baum, a Billboard sales exec from Palm Springs, whose band, Honkin' On Bobo', was mentored during the week by Lita Ford, carefully watched each band as his time slot approached.

Then, led by Ford, they headed for the stage to crank out 'Road Runner' and 'Lick it Up' with Stanley. Afterwards, Baum shared his thoughts with Noisecreep. "I thought all of the bands were incredible! It was a real class event - not a surprise coming from the Playboy Mansion. The eye candy was quite enjoyable as well." 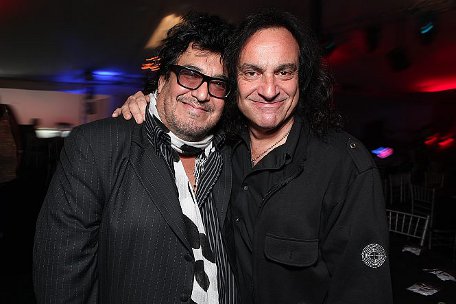 And Baum had high praise for the camp. "It is truly amazing how a group of people who don't know one another can come together and in a few short days create a cohesive embodiment of sight, sound and grove. My hat is off to all of the camp counselors. I guess experience and professionalism pays off in dividends - especially with regard to Lita. What an awesome and talented lady. It was a real pleasure to get to know her as well as the rest of the campers. I was chatting with Lita before we left today and she mentioned how hard it is to just pick up and leave after an experience like this. After you have spent four days with a small group of people and bond is struck. It makes it that much harder to say good bye."

Sure, you get to taste the glamour and high life. But way more than that - you get to learn from some of the best musicians in the business. What a trip!

For more information on the Rock 'n' Roll Fantasy Camp and its different packages, please visit this link.