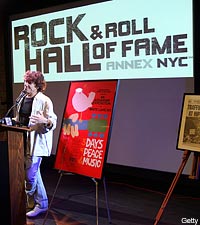 Pack your bags and book a flight to Ohio if you want to see some rock memorabilia. The Rock and Roll Hall of Fame Museum Annex in New York City will close Jan. 3. The 25,000 square foot annex has been open one year.

The annex houses memorabilia from the Beatles, Rolling Stones, Bruce Springsteen and more. It's possible the annex will convert to a traveling exhibition, but no concrete plans have been announced.

A press release gave no official reason for the abrupt closing, but Rock Hall CEO Terry Stewart said the decision was made by corporate partners who had backed $10 million for the annex in Manhattan.

Officials had hoped the N.Y.C. annex would attract half a million visitors annually. However, attendance figures have not been revealed.

The actual Rock and Roll Hall of Fame and Museum is located in Cleveland and opened in 1995.