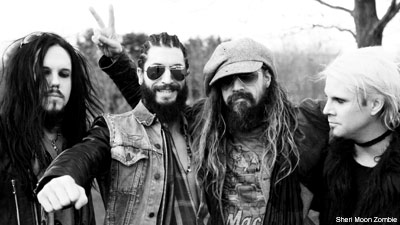 Right before Korn starts their headline set on Mayhem 2010, Rob Zombie will take the stage to enthrall the masses with a mix of industrial-tinged rock and B-horror movie theatrics.

For Zombie, being a musician means staying true to the same artistic vision he's had since he founded White Zombie with some fellow students at Pratt college 25 years ago. He loves the pounding rock of the Ramones, Sex Pistols, the Cramps and the Misfits, and he loves the stage presentations of Kiss and Alice Cooper. And over the decades he's found new ways to combine his enduring obsessions into variations on the same themes.

Since audiences know what to expect from Zombie, there's little chance of anyone leaving Mayhem 2010 disappointed by his set, which will feature many of the heavier numbers from throughout his career. In fact, of all the performers on the festival's main stage, Zombie's got the least to lose and the least to gain. Pretty much everyone knows who he is -- though maybe some Lamb of God fans haven't seen him before -- and if you loved or hated him before, Mayhem 2010 isn't likely to change your mind.

Noisecreep recently talked to Zombie about his plans for Mayhem and how he's content to remain "trapped in a time warp."

What bands are you looking forward to seeing?

The only band that I know that's on the tour besides us is Korn. But I'm always interested in checking out everybody because I don't really go to shows that often except when I'm on tour. That's the only time I see bands, so I pretty much will be checking out everything.

Anyone catch your ear lately?

I'm probably the wrong person to ask. I have no idea what's going on with music. I'm trapped in a time warp. I just like the stuff that I like and don't know what else is happening.

I'm not really sure. I always construct the set based on what I think the crowd wants to hear. We'll do a bunch of stuff through the years, all the White Zombie songs people like and the songs up to the new record. I don't know which songs from the new record we'll do but by the time we get to Mayhem I'll have been on tour long enough to know which songs people like.

What will you be doing during your downtime at Mayhem?

Barbecuing in the parking lot is fun. People used to do that on Ozzfest. All the buses were there so all the people were around. Usually my downtime on tour is spent working, prepping the next movie I will be shooting. So most likely, while everyone is out in the parking lot barbecuing, I will be in a hotel somewhere working on a script.

Which one will that be?

Whichever one is necessary. I don't know what the next movie is going to be. I have four or five things that are in this early pre-production phase, one of which is a remake of 'The 'Blob' [that people have been talking about], and I'm not sure which will materialize into a movie next. My goal is to know by that point.