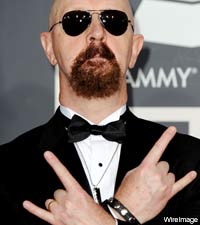 It looks like the rumored Elton John and Lady Gaga duet is indeed on the docket for tonight's Grammy Awards, which begin airing at 8PM EST on CBS. Noisecreep ran into Judas Priest frontman Rob Halford before the big event, with Halford revealing that the rumored performance by John and Gaga will be the highlight of his evening, saying, "I'm a big fan of both, so that'll be my moment."

We wonder if Judas Priest wins the Best Metal Performance Grammy -- they're nominated for 'Dissident Aggressor' from 'A Touch of Evil - Live' -- will be an even bigger moment for Halford and his bandmates. Only time will tell.