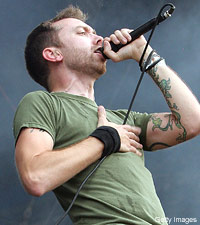 Politically-charged melodic hardcore band Rise Against, originally scheduled to headline the Buzz Bake Sale this December, have pulled out of the show due to disagreement with their stage sponsors: the U.S. Army Recruiting Department.

The annual concert put on by West Palm Beach, Fla. radio station Buzz 103 was not yet announced, but once Rise Against backed out, the station's owner and morning-show DJs went public, discussing the situation on-air, calling the band 'un-American' and accusing them of having 'anti-American attitudes.'

From iLike, the band writes to their fans:

"Earlier this year, Rise Against agreed to the play the Buzz Bake Sale in West Palm Beach ... We've played this same show in the past and it's always been a great time, the crowds are epic, the station has always been gracious hosts, and we were honored to be asked to headline it for the first time this year ... As a band that has worked in counter-recruitment in the past, we decided it would be hypocritical and inappropriate for us to headline this stage [with the U.S. Army sponsoring it]. In addition, we were surprised that a radio station claiming to be familiar with Rise Against thought that we would be OK with the idea that we would play a show and subject our fans to military recruitment tactics in a time of war, a war we adamantly and publicly have opposed since it's bumbled inception ... this was not an event to honor the military, this was an event that the U.S. ARMY was interested in recruiting people at, and we felt that our fans should be free from that interference at a rock show on a Sunday night in a time of war."

Speaking directly to the radio station, Rise Against continues:

"If we were to bow to this pressure, we would not be Rise Against. Shame on you BUZZ 103 for even asking us to. Last time we checked, supporting the troops involves more than just accepting their money that you need to put on shows. We are sorry to the Rise Against fans who took BUZZ 103's word as truth and had to spend the better part of the day believing that we are the monsters the DJs made us out as."

The band has also assembled comments from members of Thursday, Anti-Flag and Flobots regarding the situation:

"We've found that people in the Armed Forces tend to understand firsthand the value of standing up for what you believe in, so I think they'll respect this decision. They know that there is a huge difference between supporting the troops and supporting the recruitment of young people to fight wars started by politicians. Anyone who knows Rise Against knows how much they care about the troops." -- Jonny 5, Flobots

"Playing Rise Against songs on a stage sponsored by the army is contrary to the beliefs of the very songs. Militarism is not the solution to the problems we face in this world today. That is the very dialogue that Rise Against is trying to create with their songs and this statement. The fact is that Rise Against care about all men and women, INCLUDING the men and women that serve in the military. We have seen these very people sent in to harm's way without just cause too many time. It is because of this misuse of the U.S. Army, that a band like Rise Against must make this statement." -- Number 2, Anti-Flag

"Radio stations like the Buzz have made their name playing artists who think outside of conventional musical paradigms. It's sad that they are undermining their artists' beliefs by bullying them and calling them names when they have a difference of opinion. Implying that a band like Rise Against, truly one of the most compassionate and sincere bands around today, is anti-troop or antiwar, is a bold-faced lie. Rise Against is an American band against a specific U.S/ war. Period. That makes them a part of our great national debate AND quite patriotic." - Geoff Rickly, Thursday

You can also watch Rise Against's latest video and go behind the scenes with Noisecreep.

Rise Against Tour Dates
on TourTracker.com