"I read Keith Richards' book [2011's Life] around the time we started working on my book and it blew me away. It's the best rock 'n' roll book I've ever read, and I've read a lot of them. So yeah, I basically ripped Keith off. Only my book is about 600 pages less than his. Just don't tell him I said that," laughs Rex Brown.

The former Pantera and Down bassist tells Noisecreep about the inspiration behind his upcoming autobiography, Official Truth, 101 Proof: The Inside Story of Pantera.

Hitting stores on March 12 via Da Capo Press, the book is a warts and all look at Brown's journey from small town Texas music geek to platinum-selling, arena-filling rock star. Besides the insightful, and always colorful, Pantera stories included throughout Official Truth, Brown also comes clean about his own personal battles with drugs and alcohol. Not to mention his marital issues.

Brown also brings up the excessive lifestyle of his former bandmates. Even though he's naming names in the book, Brown says he's not particularly worried about throwing anyone under the bus. "Look, it's all the truth. I didn't have to clear anything with anyone. It's no secret. I'm not outing anyone. Luckily, a lot of the people I mention in the book aren't doing those things anymore. Outside of a few times, I never even did the hardcore stuff while I was in Pantera. That came afterwards for me. When it comes down to it, this isn't a kids book, or a cook book. It's a rock 'n' roll book and that stuff had to be in there," says Brown, who is currently a member of Kill Devil Hill along with drummer Vinny Appice (Heaven & Hell, Dio), vocalist Dewey Bragg and guitarist Mark Savon.

Watch Official Truth, 101 Proof: The Inside Story of Pantera Trailer

Now living a clean life, Brown, 48, says he's at peace with his alcohol-fueled, drug-addled history. "That's all in the past, and I don't live in the past. I just had to go there for this book. I don't lose sleep about what I've done. You gotta remember, a lot of that drug stuff happened after Dimebag died, so I was a mess," Brown says about former Pantera guitarist Dimebag Darrell's tragic death in 2004 during a performance with his then band, Damageplan, at a club in Columbus, Ohio.

Jerry Abbott – father of Dimebag and his brother, drummer Vinnie Paul – is a vital part of Pantera's story, managing the group early on and helping them in the studio, and Brown admits that, but as he writes in Official Truth, it hasn't always been a harmonious union. The bassist feels that Jerry lined his pockets off the band way after his working partnership with them had ended. "The way I equate is [baseball legend] Barry Bonds Sr. was really involved with his son when he was a kid, but does that mean he should get half the money his son makes. It doesn't make very much sense to me. Instead of just asking Vinnie and Dimebag, 'Hey kids, I need some money. Can you help me out?,' he decided to just go and take it from the band. He felt entitled to it and that never flew for Phillip [Anselmo, Pantera's vocalist] and I. I was always in the middle since the brothers felt like they couldn't talk to their father about it. Anyway, I eventually got all the Pantera rights back anyway. That's all true shit and they know it."

A father of twin 13-year-olds, Brown isn't worried about his kids reading the more lurid tales in Official Truth, but he does he admit that he wouldn't want his daughter dating a heavy metal musician. "If she brings home someone like that, it's fucking over. I'll stop right there. But yeah, my daughter is great. Both of my kids are actually great kids and great students. They have an amazing mother, and then they have me... not sure how that works [laughs]. No, seriously, I'm a pretty good guy." 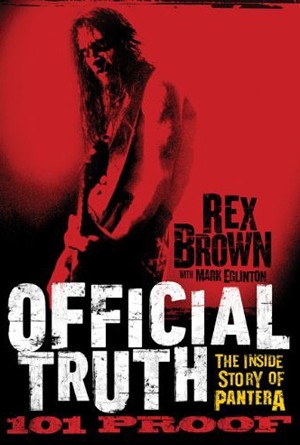 Official Truth, 101 Proof: The Inside Story of Pantera will hit bookstores on March 12 and can be pre-ordered on Amazon.