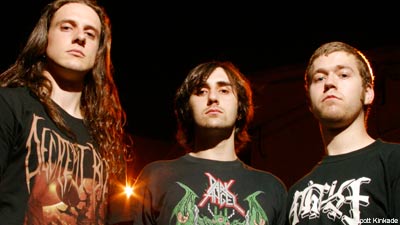 They don't come any more metal than Revocation, so it might come as a surprise that vocalist/guitarist David Davidson trained as a jazz guitarist at Boston's Berklee College of Music. "I wouldn't call myself a jazz guitarist, but some of that crept into my style," the 23-year-old tells Noisecreep. Still, metal guitarists and jazz guitarists have at least one thing in common: solos that ignore the less-is-more ethic to pack in as many licks as possible. "Yeah, that could be true," Davidson muses.

You'd need a magnifying glass to find jazz bits on Revocation's Relapse Records debut from fall 2009, 'Existence Is Futile.' It's a post-NWOBHM set with nods to Iron Maiden in its cover design, which includes an undead Eddie type in its illustration and the speedy riff 'n' roll of its fierce, otherwise thrashy songs.

Davidson says that as a band, Revocation -- made up of Davidson and his two partners in crime, Anthony Buda on bass and vox and drummer Phil Dubois, who seems to have adopted Nicko McBrain style poses from old Maiden videos -- were heavily influenced by classic metal. But they are open-minded and listen lots of different music.

"We have a wide range of influences. We were just listening to Thin Lizzy in the van," he says. "We play with metal bands every night. We love metal, we love thrash, we love death metal, grindcore, all that s---. But sometimes ... it's like spaghetti," he explains. "I love a good bowl of spaghetti, but you can't eat that s--- every day, else you get sick of it. We mix it up: jazz, rock, what have you." From his Berklee days, Davidson recalls listening to classical music, too, saying, "Like, the Romantic period, that's really f---ing cool. We're not just listening to metal all the time. We listen to a lot of s---, which is what gives us a diverse sound."