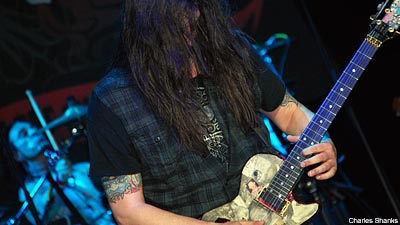 "We'll see you on deck in your tank tops and flips flops!" Tesla lead singer Jeff Keith boomed at the end of Tesla's opening festival set, kicking off ShipRocked 2009.

On Nov. 15, nearly 1,500 rock fans converged on Fort Lauderdale, Fla. to get ShipRocked for five days. The rock fans cruised on the MSC Poesia and stopped in Jamaica and Grand Cayman. Queensryche, Tesla, Skid Row, Ratt, Broken Teeth, Lynam, Endeverafter, Stereoside, Stonerider and the Niki Barr Band rocked the crowd. Kids from the Kansas City School of Rock also jammed, wowing the much older crowd with their musical abilities.

Music cruises are set-up a little different from regular festivals in that the performances take place in many different locations. Tesla, Skid Row, Ratt and Queensryche all performed in the ship's main theater. The sets were of average length, but because of the nature of the crowd -- mostly diehard fans -- song choices were varied from the average festival show. Tesla played 'Comin' Atcha Live' last, a rare occurrence for the band that usually chooses this song as a show opener. The band also played 'Edison's Medicine,' not necessarily a live staple. Of course, there were the old standbys that made it in the show like 'Love Song' and 'Signs.' Since Tesla was the first band to play on the ship, the crowd was most rowdy, despite a ban on any liquids in the theatre area.

Shortly after Tesla, fans filed out, looking for the afterhours entertainment, provided by one of the newer bands on the boat. Niki Barr Band, from Baltimore, Maryland, played a mix of originals and covers on the open deck stage. Screaming well into the night somewhere in the Atlantic Ocean, Niki Barr and her band played tunes from their most recent EP 'Bloom.' Can it be too loud? After that first night, bands playing the top deck stage had to check their swearing at the door. The volume remained high.

When Ratt played, there was a palatable sense of excitement. Not necessarily because fans wanted to hear 'Round and Round' live -- the crowd on the boat had all already been there and done that -- but because everyone was curious to finally see Stephen Pearcy. For nearly the entire voyage, Pearcy stayed locked in his cabin, venturing out only when necessary. When it was time for the official meet and greet, Pearcy was escorted by security -- and taken back to his cabin in the same manner. It was pretty clear that when Ratt played, there was trouble in paradise. This isn't to say that guitarists Warren DeMartini and Carlos Cavazo didn't sound great together -- because they did. It was more that the band as a whole refused to interact on stage and drummer Bobby Blotzer didn't even come down front to accept his applause. Pearcy looked disinterested during the entire show -- and maybe he was. This didn't keep the fans from singing along to the hits, and the B-sides as Ratt did the entire 'Out of the Cellar' album from start to finish. 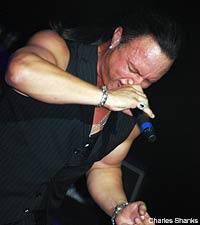 Queensryche kept up the idea of the 'theme' show by splitting their set into sections, playing tunes from 'Rage for Order,' the new 'American Soldier,' and 'Empire' in that specific order. The 'American Solider' section of the show is long for a new album, but to Queensryche's credit, the band has never been afraid to play new songs live. Plus, this wasn't an average show. More than half the people on ShipRocked had clearly plunked down the cash to see Queensryche in a special, intimate setting.

Most fans had giant Queensryche tattoos that were proudly displayed as a conversation piece. Unlike most bands, Queensryche rotates songs regularly in and out of their set, so it's highly likely to see two different shows back to back. Still, the special Shiprocked show featured a mix of both 'hits' and obscure tracks, including 'Walk in the Shadows,' 'Jet City Woman,' 'Silent Lucidity,' 'Empire' and 'Home Again' (featuring Geoff Tate's daughter) among others.

There were special Queensryche events for fans beyond the show, too. Singer Geoff Tate and his wife hosted a wine party to raise money for the National Military Family Association. Tate recently launched his Insania wine brand in partnership with 3 Rivers Winery in Washington State. Insania is Latin for insanity and irrationality. The guys in Queensryche enjoyed some less serious business, too. During the special '80s prom, Geoff Tate and his wife cut a rug -- staying on the dance floor much of the night and thus becoming the de facto king and queen of the prom. The Tate daughters also attended the prom, dancing much of the night away. Miranda Tate and her husband, Queensryche guitarist Parker Lundgren also got in on the fun, happily posing with fans on the dance floor.

There's no bones about it: the guys in Skid Row are a friendly bunch and they like to drink, too. So, Skid Row spent much of the week on the top deck, chatting with music fans -- and people not on the cruise. During the entire trip, most people involved in the Shiprocked group were quizzed by at least one person on the 'regular' cruise. These non-Shiprockers wanted to know all about the music, the mayhem and the bands. In every instance, the rockers were happy to explain their love of music and passion for the bands on board. So, Skid Row would happily explain to anyone who asked that they were musicians, looking forward to playing and glad to be on the boat.

There was no concept to the Skids show. Instead, it was just a balanced mix of songs for both the Solinger and Bach eras of the band. During the finale of 'Youth Gone Wild,' students from the Kansas City School of Rock joined Skid Row on stage for a little impromptu jam. Guitarists Scotti Hill and Snake Sabo gave up their guitars to the kids and Solinger forfeited the mic. Other tunes played include 'Psychotherapy' fronted by bassist Rachel Bolan, 'Slave to the Grind,' 'I Remember You,' 'Monkey Business' and more. Like Ratt, Lynam and Endeverafter, Skid Row played the Motley Cruise. All through Skid Row's set, the band members each thanked fans for their continued years of support and for continuing to spend money on live shows.

It's possible Lynam is the best band you've never heard. The Birmingham, Alabama based trio has released five albums, the newest 'Tragic City Symphony' features Tom Keifer of Cinderella fame. The support bands performed twice, in smaller venues around the ship. This means fans of Lynam, Broken Teeth, Stonerider, Stereoside and the Niki Barr Band got a double dose of fun for their money.

There was non-musical fun for Shiprockers too including private meet-and-greet sessions, an Insania wine party hosted by Geoff Tate, heavy metal jeopardy, charity events and more. Cruisers also had the opportunity to take part in normal cruise activities not associated with Shiprocked. Plans are underway for Shiprocked II. Bands will be announced soon. 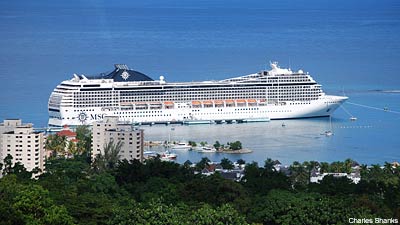