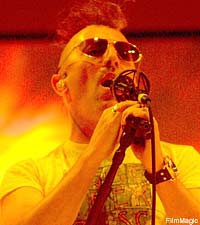 In March, Maynard James Keenan is back on the road with his vaudevillian performance art troupe, Puscifer. The tour kicks off March 2 at the CW Center Stage in Atlanta, and continues through April 3, with Puscifer pulling double duty, featuring two-night stands in most cities.

The tour is the second jaunt since this expansive band of musicians and comedians debuted in Las Vegas on Valentine's Day 2009. In between musical dates, Keenan has been busy launching his Arizona winery, Merkin Vineyards. It's not a case of juggling his two roles, though. Keenan says making music and making wine work well together.

"It's definitely a tandem thing. With wine, there's a lot of waiting and that can happen with music, too. It's good to have a backup," he tells Noisecreep. In fact, in stepping back from the music business and moving away from Los Angeles, Keenan says he's gained a sense of balance.

"Doing this gives a sense about what actual drama should be," the Tool and A Perfect Circle frontman says of wine making. "Living in Hollywood, there's manufactured drama. It's not real. The reality TV shows just reek of that disconnected sense of who are they and where are they. The drama might be real to them, but they are not real dramas. When it starts to hail, that's drama. A frost in May is real drama. You can't plant a thing and watch it grow and not have it affect you positively."

The Ohio native, who lived in Massachusetts before moving to L.A. and forming Tool in the early 1990s, feels at home in Arizona. "I had a dream I was supposed to be here and I have been here since 1995. Everything from Mexico up to Vancouver, every piece of west coast terrain is represented somewhere in Arizona. The terrain is that diverse here," he said.