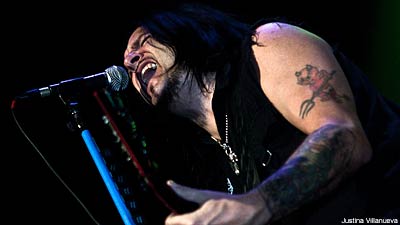 "Hey Chelsea, we are Prong!" Vocalist Tommy Victor wanted to proved to New York City that the band has really returned from their hiatus. It took two songs for the audience to warm up before the mosh pit grew wide and the horns started flailing. And just before you knew it, Prong were being hailed like true metal/punk gods. Even during slower songs, Prongsters kept the pit moving. They actually danced instead of ramming into each other.

The band, which originally formed in 1986 and disbanded in 1997, consisted of bassist Tony Campos (Static-X) and drummer Alexei Rodriguez (ex-3 Inches of Blood, Walls of Jericho). Rodriguez' drum kit had 'Rock in Peace' memorials customized onto the kick drums for former 3 Inches of Blood bassist Brian Redman. Redman recently passed away in a tragic car accident that devastated the metal community.

Prong steadily played songs so that a mostly seamless set streamed until they finished up. Victor, however, did make time to note that just 15 years ago Prong toured with Sepultura and Pantera. This tour definitely stirred up some memories for the vocalist/guitarist.

The month-long tour with Soulfly, Cattle Decapitation and Mutiny Within ends in Alburqurque, N.M. Prong's 'Power of the Damn Mixxxer' was recently released on 13th Planet Records.