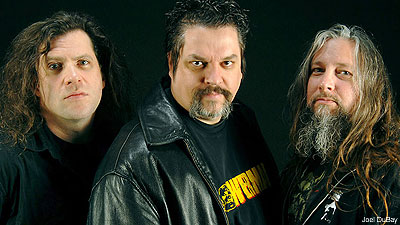 In 1989, Powermad had all of the tools it took for a metal band to break through to the mainstream. The Minnesota combo were signed to Reprise Records, they had a high profile cameo in David Lynch's cult hit film 'Wild at Heart,' and their debut album, 'Absolute Power,' was packed with one anthemic track after the other. That's why when Powermad threw in the towel in 1990, many metal insiders were left surprised.

Luckily for the scene, Powermad returned to touring in 2007. And now they're working on an album of new material. In this exclusive interview, Noisecreep asked vocalist-guitarist Joel DuBay about the band's past and their plans for 2010.

Powermad started out in Minneapolis way back in 1984. There was a strong music scene there with artists like Prince, the Replacements and the Time, but how tough was it for a metal band?

Yeah, there weren't very many real metal acts playing original music in Minnesota at the time, and the scene was ripe for such. We started writing our own music, playing at clubs and the next thing you know -- we were getting attention from people. Not because we were anything really special at the time, but because the musical landscape in Minnesota was devoid of original metal music. And luckily for Powermad, people wanted it. I remember doing a little demo and having it played on KFAI, a college station, then on First Avenue's version of open mic night, we had 600 people there. It was a great time to start something in Minnesota.

Your debut EP came out on Combat Records, but then you signed with Reprise Records. Did the label provide you with a huge budget for the recording of the 'Absolute Power' album?

Compared to budgets for other artists at the time, ours was low. Also, labels, management and bands find ways to eat up that funding rather quickly. However, if we had that same budget today, we'd be able to make two or more records from it. Remember, digital recording was barely in its infancy at the time, and we recorded 'Absolute Power' to two-inch tape! Doing so means you're going to end up in a bigger studio that costs more money, and that can facilitate recording via that medium.

How involved was your A&R guy in the recording process, and did the label expect Metallica type of numbers from you?

Kevin Laffey was our A&R man and our champion. He really, really believed in Powermad and let the band take the reins when it came to selecting folks to work with. For instance, he allowed us to select the gent who'd eventually mix our record, James 'Jimbo' Barton. Many A&R chaps won't let you select anyone for your project, but Kevin did. He was, and is great. In terms of numbers, there was no perception or any preconceived idea that we'd be able to do what Metallica or any other artist had done in terms of sales. They looked at us as a fresh bunch of artists that were in the infancy of our writing. They liked Powermad and wanted it to succeed. Then, grunge happened, and the music world turned a corner. Some came along, and some didn't.

Powermad made an appearance in David Lynch's film, 'Wild at Heart.' How did that end up happening?

Again, Kevin Laffey was point man on this. He was at David's house playing music. He asked David if he could play the new Powermad, and he agreed. Kevin put it on, and turned the volume down a little out of respect -- but David heard the intro to the song 'Slaughter House' and turned up to like a million. When it was done, Kevin intimated that we were fans of David's and that we would love to have him do a music video for one of our songs. David said something like, "Well, I can't do a music video right now -- but how about if I put them in my next movie?" 'Wild at Heart' was a big success, winning top honor at the Cannes Film Festival, and here we are.

Why did the band end up breaking up?

That is hard to say for sure with respect to [the other band members'] view of why.' But things change in your life. Priorities shift, you're creativity changes, your human goals change, your finances change and your friends change. You can't control what others do for the most part, and you have to just let life happen sometimes. We're better for it in my opinion, and we have all original members fronting Powermad again, with the exception of drum duties. Jeff Litke, Todd Haug and I are all writing, and we're quite happy with what we've done. It's not like anything else out there really, and I hope folks give it a chance.

Going back to the late '80s, I remember seeing tons of press and advertising for Powermad. The hype machine was at full power for you guys. Thinking back, do you think that might have hurt you guys in some ways?

I cannot disagree more. We had very, very little press/hype compared to other bands in my opinion. And the press we did get was almost 100 percent fan based. Meaning the writer of most of the articles was a fan of Powermad, and not just writing because they were assigned to do so by their editor. I think it's that very reason that the buzz about Powermad has continued. It's the only thing I can chalk it up to.

Was it tough convincing the other guys to return? Why didn't John Macaluso come back to play drums?

John is a fantastic drummer, songwriter, musician and businessman. I think about him and his contribution to Powermad often. However, John is a musical explorer, in my opinion, and has always wanted to pursue other gigs, other kinds of music, etc. We knew that when we hired him to do 'Absolute Power.' We have yet to announce the drummer for our next offering, but I assure you – no one will be disappointed when they find out who it is (laughter). For the rest of us, it was all about timing. We all have our own businesses and many things going on, but Powermad has always been there, waiting to happen again.

Your guitarist, Todd Haug, was featured in Decibel magazine recently through his work as the head brewer at Surly Brewing Company. Does he get a lot of people from the metal world realizing he's the same guy from Powermad?

Probably. Todd is a beer genius and an incredible guitarist. I think if you Google the name Todd Haug, you're going to put two and two together and realize he's the same bloke.

When can we expect a new album, and will you be touring it once it comes out?

We're hoping to do it as soon as possible, and yes there will be a tour, or many tours. We've got a bunch of great songs that we are tweaking right now, and then pre-production starts. We hope to be in the studio by late spring if all goes as we envision it. You can get up-to-date info about Powermad by visiting us here at our MySpace page or official Web site.