Featuring candid and live shots from photographers Brian Lew and Harald Oimoen's personal archives, Murder in the Front Row includes early pics of heavyweights such as Metallica, Slayer, and Megadeth, and lesser-known, yet important, acts like Vio-Lence and Death Angel.

In this Noisecreep exclusive, Oimoen (also a member of D.R.I. these days) , shares a CRAZY story from the '80s starring seminal proto-death metallers Possessed (there they are hanging with James Hetfield in the photo above). Reading Oimoen's thoughts, it reminded Noisecreep how truly frightening some of those thrash shows were in the late '80s!

I became good friends with death metal pioneers Possessed, and took on the role of semi-official band photographer, shooting all the photos on their first two albums. They had the coolest manager, a sweet friendly older lady named Debbie Abono. She became like a second mom to me and so many other people in the Bay Area, always helping bands get gigs and supporting all of us in our efforts. I even went on a few short road trips with Possessed up the coast to Washington and Oregon, supporting Slayer on their 'Live Undead' tour. They asked me to go to a one-off show at L.A.'s Olympic Auditorium, where they were supporting D.R.I., Corrosion of Conformity, and Anthrax, so my camera could document this killer gig for posterity.

That road trip became one of the scariest, most dangerous, and nerve-wracking episodes of my life. The adventure started out innocently, with a Possessed in-store appearance at a really cool little metal record shop in L.A. The band signed ceramic skulls. Jeff Becerra, Mike Torrao from Possessed, and I also received gold pentagram necklaces as gifts. Unfortunately, they were cursed, and set in motion a chain of events that chill me to the bone to this day! After that in-store, things started going horribly wrong. Mike Torrao's amps blew out mysteriously as Possessed started its set, cutting the band's stage time to a measly twenty minutes. Then, during the second song, the barricade collapsed on me while I was taking shots down in the photo pit, pinning my leg against the stage and crushing it with the weight of the entire huge unruly crowd behind me! If I hadn't seen the collapse coming out of the corner of my eye, I would have been crushed to death.

Finally, the crowd backed up enough for me to extract my badly injured leg from the battered barricade, and I collapsed onstage in front of Jeff Becerra. He stopped the show immediately and called for help. I was carried offstage and brought to an office where the two sleazebag promoters told me my leg wasn't bad and that I would be okay. I stupidly believed them, and went hobbling off to shoot photos of D.R.I. and C.O.C.! Eventually, while stumbling around on my broken leg, I found Debbie Abono. By then my knee had started swelling up with blood, and I started feeling faint due to my body going into shock. Meanwhile, Jeff Becerra was jumped outside by some Latino gang, and his nose was broken in the melee. Debbie attempted to drive us to a hospital, but then the curse struck again; we got a flat tire on the way to the hospital! An ambulance picked us up, but it died on the side of the road-we had to wait for another one. What was going on? Talk about a cursed trip.

Eventually we made it to the hospital, and Debbie insisted that we throw our cursed pentagram necklaces out the window. Nothing bad happened to anyone else-only Torrao, Becerra, and I had horrible things happening, and we were the only ones wearing the necklaces. This scared the crap out of me! Debbie waited on me hand and foot while I recuperated at her house. I eventually had knee surgery, and a huge piece of chipped bone was removed through a hole drilled in my kneecap. I used to think satanism was something of a joke; now I was relieved to be alive. And it got freakier: our van odometer read 000666 when we arrived home! (Okay, I admit that part might be a little embellished.) 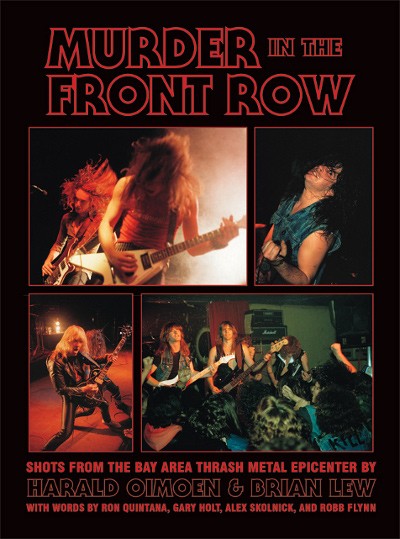 Murder in the Front Row: Shots From the Bay Area Thrash Metal Epicenter is available now via Bazillion Points.