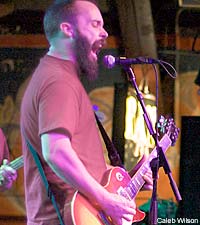 Planet Caravan Festival has come and gone. A rare festival to take place in the U.S. -- let alone in the quiet Asheville, N.C. -- for the sheer fact that the lineup itself was a pure celebration of all children and grandchildren born from the forefather of stoner rock, and boasting such acts as Pentagram, Yob and Wino. But as is the case with the very nature of stoner rock, which is not something to just dabble in from time to time, a festival like Planet Caravan is about the die-hard fans and those that live for the lows and the loud.

The first day firmly planted its foot by way of the legendary Scott Wino, who always seems to bring out fans from the regions of biker bars and places oddity to never be seen at any other types of shows. In this way Wino did not disappoint, with a small verbal struggle commencing at the entrance to the venue before set time began, with a fan arguing with the event staff trying to secure a place to store his rain jacket that would be safe from being stolen.

"Carry it and set it somewhere," a guard told the fan. The fan was growing impatient as even at his distance from the stage he could see Wino, his 'hero' as he declared later in screams toward the stage, was about to begin. 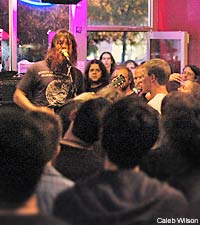 The fan forgot words and just leapt through, running towards the stage. On first riff and solo, this fan threw his jacket, his shoes and shirt in a reckless pile and began to dance and march in a circle designed and spaced for himself. "Play some god damn Obsessed," he yelled. Wino, sporting thick black glasses, sat for the remainder of the night at the bar signing records and living the moment with his devoted.

Burst and Kylesa followed on the main stage, playing blistering sets, though Burst began with technical problems prompting seated guitarist Robert Reinholdzto to exclaim, "This day's been a f---ing disaster," labeling the day as a result of "Murphy's Law." After 10 minutes the issues caused from stubborn amps, heads, and chords were resolved and Burst began the first set of a slew of worldwide shows that will mark the planned breaking up of the band later this year. 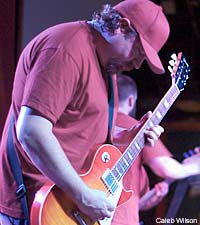 Bison BC set the pace for the second stage with high energy and screams through beer-soaked beards. But the band the stepped it up, in the way that makes ears rings for a few days later, was Atlanta's Zoroaster. Known for being one of the sludgiest and loudest bands around, the members of Zoroaster were weary going in playing without all of their amps -- the result of being on a bus tour and having limited room. The feedback swelled the small room and bassist Brent Anderson introduced the band and drummer Dan Scanlan yelled out, "And we're drunk as f---k."

That sentiment summed up all performances of the night, and caused vomit remains and smells in the carpet to be the contention for bands the next night. Zoroaster's output was raw and visceral, and it bleed out a block down the street to The Orange Peel. With the high noise the vocals ended up being swallowed up. "That's typical for us," guitarist Will Fiore told Noisecreep rather disappointed that the sound was not up to his standard for loud but the mob of fans who listened outside due to the deafening levels inside would disagree.

The night closed out with the almighty Clutch, who easily took home the award for most awesome merch for their two-foot-long bumper sticker, taking to the main stage. Singer Neil Fallon smiled at the crowd that swelled up for their set; his eyes connected with every head swaying to the teasing beats of their first song, and Fallon displayed a devilish grin, as the faithful became lions with the loudest screams heard all day.