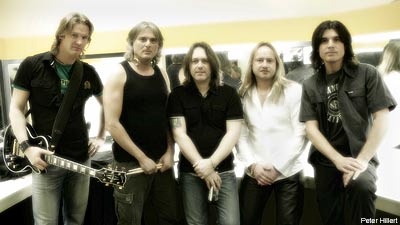 "Metal is very, very vital," Pink Cream 69 drummer Kosta Zafiriou unequivocally states to Noiscreep. "The scene is all over the world. It's not the absolute mainstream scene besides Metallica and AC/DC, but it is still very vital."

Zafiriou knows a thing or two about sustaining longevity and weathering the ups and downs of the music business. German melodic hard rockers Pink Cream 69 just released a special 20th anniversary DVD called 'Past and Present' and CD entitled 'Live In Karlsruhe.' Zafiriou is also on the management side of the business, handling touring affairs for not only PC 69, but also Helloween and Krokus, among others. With all that experience, Zafiriou says bands should celebrate their longevity, just like Pink Cream 69.

"We've been asked so many times [to do a live DVD]. We did a live record back in 1997. We've been asked many, many times by the fans 'What about a DVD? You guys have so much material.' It does have the 20-year anniversary character, the DVD. The DVD offers way more than the average concert. We [recorded] the concert in our hometown of Karlsruhe, Germany at the beginning of the year. We still have the 60-minute live video from Japan we did back in 1992 with our old original singer Andi Deris, who is in Helloween."

According to Zafiriou, traditional videos are once again relevant for bands because producing a decent clip these days is relatively cheap. Thanks to YouTube, MySpace and video on demand, bands can spread videos on their own terms quickly, which makes distribution easier than when MTV controlled everything. Still, Pink Cream 69 wanted to give fans an extra rare treat with 'Past and Present.'

"We have all the video clips the band ever did, [a] one hour interview backstage and rare footage, we have some bonus material with some festival appearances, so it's really, really packed -- it's a full blast of Pink Cream 69! With the 20th anniversary, we didn't try to just make a record and a regular live DVD to give not only the fans, but also people just discovering the band the full range view of what we've been doing the last 20 years."

Both the DVD and live CD are available in North America as imports.