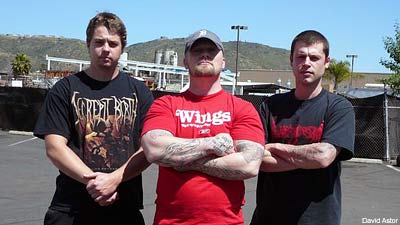 So many death metal bands employ medical terminology and jargon in their lyrics, because, well, the blast beat and the operating room are both pretty bloody, intense scenarios! San Diego's Pathology, featuring drummer Dave Astor, formerly of Cattle Decapitation and the Locust, are certainly mining the same lyrical source in their music.

Astor told Noisecreep, "With our name Pathology, which means the causes and effects of diseases, it just makes sense to sing about medical stuff. Yes, the medical thing has been done before with bands like Carcass. But it is a fun and brutal subject to sing about and we like it. Death metal and medical lyrics go together great. There are not too many bands these days that still do the medical thing anymore. We just like to sing and play what we like and luckily people seem to like it."

Astor describes the band as "brutal death metal" which has catchy melodies, "tough riffs, extremely deep and low vocals, and a mix of old and new schools of death metal." Astor formed the band in 2006, releasing 'Surgically Hacked' on Amputated Vein in Japan. 2008 saw the release of 'Incisions of Perverse Debauchery.' In 2009, the band issued 'Age of Onset,' with new singer Matti Way, who once sang for Disgorge and Cinerary. Pathology, with their prolific nature and pedigree, may be a death metal fans new favorite band in 2010.