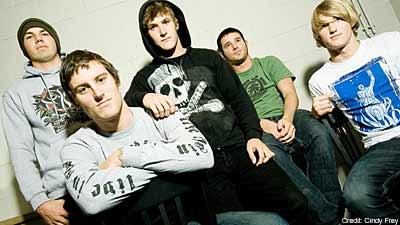 Metalcore quintet Parkway Drive have plans to expand upon their 2009 DVD success with a new album in 2010. Released in August of last year, the Byron Bay, Australia band's 'The DVD' is a semi-documentary. It tells the story of the rise of the Aussie surfers with live footage from their 2008 'Sweatfest' tour, behind the scenes interviews with members (past and present) of the band, as well as testimonials from people like Adam D. of Killswitch Engage and Bret Gurewitz of Bad Religion/ Epitaph Records. The 70-minute story was shot and edited by the band, went gold in it's first week of sales, and it has now been certified platinum in Australia, holding the title of the highest-selling Australian artist music DVD for the year.

Frontman Winston McCall tells Noisecreep about the feat, "It's pretty mind-blowing really, especially considering we are living in the age of file sharing [laughs]. Seriously though, the fact that this many people went out of their way to support something we put so much of ourselves into is amazing. The feedback we have had from people at shows who have watched it has been great. It's a great feeling to know that the message you were trying to send actually got through. Looks like we owe a lot of people a solid new album now; fingers crossed!"

Currently writing the follow-up to 2007's 'Horizons,' the currently-untitled third album will be out later this year. Keeping with incessant touring traditions, Parkway Drive will be headlining the east coast of Australia this winter and hitting some European festival dates in the spring before joining the 2010 Vans Warped Tour in the U.S. this summer.