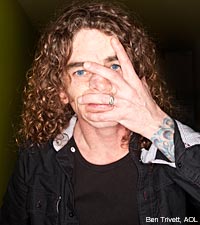 If you're a fan of thrash metal, by now you've probably seen the legendary Overkill '!!!F--- You!!!' T-shirt. The original 1987 version depicted an upraised middle finger, the newest edition features the band's bat skull logo atop a backdrop of the profanity. But even if you own the illustrious piece of apparel, you might not know the history behind the shirt of the 1987 EP it was originally modeled after.

"We were actually on tour with Megadeth [when we recorded the EP]," Overkill frontman Bobby 'Blitz' Ellsworth told Noisecreep. "[Megadeth frontman] Dave [Mustaine] was doing an old-school broadcast [for] Westwood One from a place called the Fantasy Theater in Cleveland. So he came over to the bus and said, 'Listen, I got this mobile studio. It's just going to be sitting here while you guys are playing. If you want to record, all you gotta do is pay for the tape.' And that's how the EP came about. It was never planned. It was kind of a gracious moment from a friend saying, 'Hey, come use my studio.'"


The EP featured live recordings of 'Rotten to the Core,' 'Hammerhead,' 'Use Your Head' and 'Electro-Violence' along with a spontaneous cover of "!!!F--- You!!!" by the Canadian punk band the Subhumans.

"A lot of people don't know that was actually a cover song," Ellsworth said. "The first time I saw it performed was by another Canadian punk band called DOA. And actually [Overkill bassist] D.D. [Verni] and I went all the way up to Montreal to see Voivod and ended up in some downtown slam club watching DOA perform '!!!F--- You!!!' and we said, 'We gotta do this.'"

Realizing that the EP would be controversial and that controversy could be immensely valuable, Overkill immediately printed up T-shirts of the '!!!F--- You!!!" design. Over two decades later, they're still printing 'em.

"It's probably the best selling T-shirt we've ever had," Ellsworth said. "People have to buy them more than one time because when a youngster would pick it up and mom would find it, out it would go. And then he would come back to the show and buy another and another."

The song has retained its place in the band's set as well. Typically, Overkill end their shows with "!!!F--- You!!!" Only instead of playing it through, they usually split it up into two parts. "There's a breakdown part in the center where we'll stop the song," explained Ellsworth. "We've done everything from unreleased material in that breakdown part [to other cover songs]. For the upcoming tour, we're doing 'Sonic Reducer,' which is another cover by the Dead Boys. We've done Motörhead's 'Overkill' in there and the [the Ramones'] 'Blitzkrieg Bop,' so it's always punk meets punk at the end of the show."