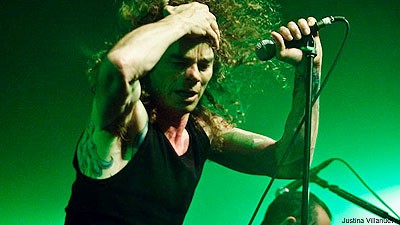 New York City's Times Square was completely blocked by the time Overkill went on May 1 at 10:30 PM. A bomb scare brought just as many policemen and bomb squad personnel as thrash fans and tourists. In consequence of the potential explosion, authorities told many fans that the show was canceled. But it was not. Overkill, in fact, played to a still very packed Nokia Theater -- even the seated area was full -- despite people being turned away.

"It feels good to be in a room full of friends, mother f---ah!" frontman Bobby Blitz told the crowd. The thrashers played some classics like 'Wrecking Crew' from 'Taking Over' and 'Hello From the Gutter' from 'Under the Influence.' 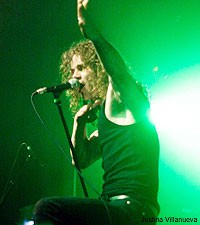 "It's all about the metal man," Blitz said. He's like the Iggy Pop of thrash -- and possibly metal (please dispute with me if you can think of an even more energetic frontman).

"This is the sweet sound of metallic mayhem. We've been doing this for a long time, right? But what makes my heart beat even faster is when you know the new s---," the vocalist said while patting the left side of his chest. He's proud that the band has been able to go from "local to global."

When they played 'Ironbound' -- the title track of their 2010 effort -- fans went just as crazy as they did for the songs that were released more than 20 years ago. Be sure to check out 'Ironbound' if you dig any of Overkill's 14 other albums.