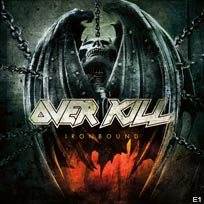 East Coast thrashers Overkill return with 'Ironbound,' the 15th installment in their discography spanning two decades -- certainly more than an impressive career, especially for practitioners of an extreme form of music. Travis Smith from Seempieces, based on the opposite American coast -- who has done 'Immortalis,' 'Killbox' and 'Bloodletting' for the band before -- contributed his artistic talents for 'Ironbound.'

If Overkill have one of metal's more ambitious careers, then Smith can be considered their counterpart in the design world. Smith has created a dizzying number of works of art for metal bands (nearly 100), ranging from Opeth to Strapping Young Lad to Iced Earth.

Like much of their previous work, 'Ironbound' features Chaly, their skeletal bat mascot. Comparing all the renderings of Chaly throughout the years yields vague results; there's no one canonical physiology save for bat wings and a skull with pointed ears (compare this with Eddie, Iron Maiden's mascot, who has a distinct, specific appearance). Chaly is an artistic Rorschach, where a designer's style and personality can be etched onto their visual interpretation.

Overkill plan to embark on a European and U.S. tour in support of 'Ironbound.'