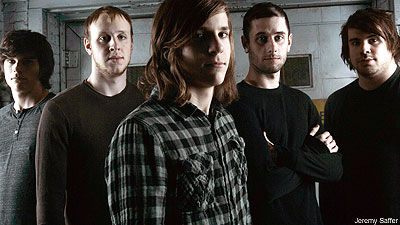 In keeping with the spirit of the digital age, we decided to put Our Last Night guitarist Matt Wentworth to a little test. We wanted him to answer our first interview question in a fashion akin to Twitter: give us the introductory lowdown on his New Hampshire band in 140 words (not characters) or less. He aced the challenge.

"Well, my name is Matt, I play guitar and sing in Our Last Night. We started the band in 2004 when we were all in high school. Right now, our ages range from 16-22. In 2007, we signed to Epitaph Records and started touring. We released our first album, 'The Ghosts Among Us' in 2008 and our second album 'We Will All Evolve' will be out this spring 2010." Damn, he nailed it, quick and to the point.

Now that we've gotten that out of the way, Wentworth mused about what type of hard rock fan Our Last Night will appeal to, telling Noisecreep, "On a few tours, we have played in front of a slightly older crowd every night and I felt like we were more successful with them as opposed to a high school-aged crowd. On the new album, there is a broad range of music styles; there are songs for As I Lay Dying fans all the way to All Time Low fans. It should be interesting and maybe even confusing to see where we will fit in the rock/metal scene after 'We Will All Evolve' comes out."

Since Our Last Night formed at such tender ages, the music business and hard rock lifestyle certainly ages and teaches you at the same time. "Everyone should try to gain and learn as much as they can from every experience in life, bad or good, and take everything you can from them," Wentworth, who makes frequent guest appearances on his kid sister's YouTube channel, where her friends make music videos and skits and have amassed quite a following, said, referencing the new album title and its application to their career.

"The title is directed more toward personal experiences, but we as a band have definitely learned a ton since the last album. I think collectively we have grown most in our live performance; going back and watching videos of old shows and stuff is just funny. I have honestly learn so much from being in this band I could go on forever about it!"

The band will be on tour starting in May, alongside Asking Alexandria and We Came as Romans and they will appear on a few August Warped Tour dates. As for that YouTube channel, where the guitarist jumps up and down and does stupid dances because he likes being a supportive, fun bro? OLN fans can find them by doing a search, since his sister tags the videos with the band's name.