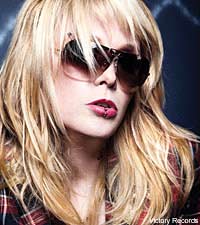 "It is truly an honor to be recognized by GLAAD," the outspoken Otep told Noisecreep. "If I had a chance to address the audience, I would encourage them to continue fighting the good fight. Being homosexual isn't illegal -- yet -- so there is no moral or legal basis for our government to continue denying one segment of the population equal rights."

Furthermore, Otep addressed the issue of gay marriage, saying, "I do not understand why some have such a problem with two consenting adults going to a courthouse to have a Justice of the Peace bind them legally. It's absurd, offensive and I'm hopeful common sense will soon drown out the hater-mongers. Most of my audience is hetero and male, and I think that is a huge indicator of the positive space the counterculture exists in."

Since most of Otep's fans are heterosexual males, one might wonder if she encounters discrimination on the road, while on tour in the red states. "I've never really had anyone confront me about being a lesbian," she said. "I seem to have tons of ladies -- straight, bisexual, 'gay for a day' -- petitioning me to induct them into the dark sapphic arts. But I think that's typical for most societies.

"Lesbians tend to be a bit more accepted than gay men. Adam Lambert is an excellent example of this. After his 'controversial' performance, his TV appearances were cancelled and who did one network replace him with? Chris Brown. What message does that send to the world? That Americans are much more comfortable having a woman-beating cockroach like Chris Brown in their living rooms than a gay man? It seems our collective moral priorities are in the sewer."

Otep's role as a somewhat of an unintentional spokesperson for the gay community isn't something she planned. "I never really think about myself as a spokesperson for anything, really," she admitted. "I am a loud and proud citizen of this great nation and I believe in using my freedoms or risk losing them. I do not want to be leader. I want to inspire others to lead."