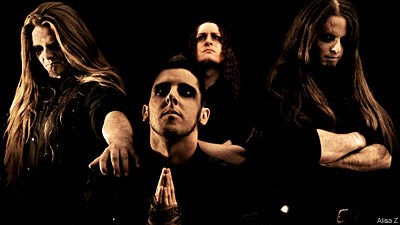 U.K.-based, orthodox metallers the Order of Apollyon, featuring members of Cradle of Filth, Aosoth, Trigger the Bloodshed and Akercocke amongst the ranks, will be releasing their debut, 'The Flesh,' later this year. It's a blackened, underground supergroup of sorts, with each member having a pedigree in another band. But the need to do Order of Apollyon stems from a simple place: strong imagery.

Guitarist BST of Aosoth -- and formerly Belgian death metallers Aborted -- fame told Noisecreep, "I've always been involved in multiple projects, as I have many ideas that wouldn't fit in only one band. It's a matter of coherence. That's something pretty important to me. We created that band, Dan and I, because of the strong musical and human connection that developed through the few years we spent in Aborted."

BST said the goal is always the same: to write heavy, straight forward metal, with a powerful religious and martial imagery. "We were impressed by the stage presence of bands like Behemoth, and wanted to do our own kind of black death metal," BST said. "I guess we were a bit frustrated because of the lack of 'aura' of a band like Aborted. We were looking for something a bit more meaningful, a bit more spiritual, and hostile, as well."

The spiritually hostile 'The Flesh' will be an eight-song opus with an intro. The music will be virtually untouched, as BST described the music as "death black metal with elements that could remind of Dissection, Watain, Behemoth and that kind of thing. The production was intended to be as organic and honest as possible. The drums were recorded in only one day, and we refused to use too much editing. 'Beat Detective' was out of the question, for example."

BST also desired to capture a "live feel" with the record. He said, "I wanted something coherent, like what the band would sound like when performing on stage. As far as the lyrics go, I will say that they are based on religion in general, inspired by the idea of divine domination, totalitarianism, propaganda, power." Those, of course, are all things that the best blackened death bands spout off about!

"The Order is meant to be more than just a band, but also an actual gathering of people, musicians or not, involved in the ideology," BST said. "I would love to see the music turn into concrete actions outside of the artistic context." If American metal fans respond to the album when it's released here -- that date has yet to be determined, BST said the band would love to tour here.

BST finished in true cryptically ominous metal fashion, saying, "Thank you for your interest. Judgment is upon us. True servants will be rewarded."