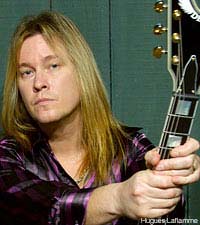 Canadian guitarist Glen Drover, who has played in Megadeth, King Diamond, Testament and Eidolon, is offering online guitar lessons. Available in 30 or 60 minute sessions; potential students need to have Skype or MSN installed on their computer along with a web cam that has a built-in microphone.

"I've worked with all kinds of different (skill) levels. There's no specific level that's mandatory to sign up," Drover told Noisecreep. "I've been teaching for years and just recently expanded from in person to live online lessons as well. It's been great." For both teacher and student, online vs. in-person lessons "are really not that different. It works the same. I've met some really cool guys online. You can communicate the same. It's equally as productive online as it is in-person, as long as you have a good Internet connection and a good quality web cam."

Currently endorsed by Dean Guitars, Drover began playing at age nine. "I've been a music freak ever since I was very young, starting with Kiss. My oldest brother Brian always had an acoustic guitar lying around and I had asked him to show me a couple of things to get me started, which of course he did. I got my first electric guitar when I was 10 – for Christmas. I quickly progressed with it because I was so excited about it – which is one of the key things for playing guitar. I've had students in the past where they want to learn everything in five minutes. I tell them, a big part of guitar is the enjoyment of playing and wanting to play. You shouldn't feel like you 'have' too. Play when you 'want' too – that's where all the good results come from."

After a couple of years "playing along to old (Black) Sabbath albums," Glen started taking lessons when he was 14. When asking Glen if he could receive instruction from anyone, his response was, "Al Di Meola because that's a different world and he is one of my favorite players. Even though I've been listening to his music religiously for quite some time and have dabbled in it, there's a lot that I'd really like to learn."

In fact, Glen recently teamed up with Saga's Chris Sutherland and Jim Gilmour to cover Di Meola's, 'Egyptian Danza'. "We're working on a whack of original instrumental stuff right now and hope to have a full length album ready before the end of 2009. The Al track was the first we recorded and there may be two more cover tunes by another jazz artist by the name of Jean Luc Ponty, who is yet another artist I grew up listening to. As far as 'Egyptian Danza', it was great fun doing that track and very challenging. There's a lot going on in that piece and I think the outcome is very interesting. It's a mixture of prog and jazz, not necessarily true jazz-fusion like the original. This is probably due to the fact that Jim Gilmour and I have strong prog rock/metal type backgrounds."

As far as gear goes, the selection today is larger than ever and it isn't necessary to spend thousands of dollars to achieve a decent set up. "Compared to when I was younger, there is so much available, it's great! Back when I first started playing, aside from the more expensive Les Pauls and Fenders, you had the really cheap guitars and amps. There were only a few lines of pedals, not like there is now. Amp modelling is very popular as well. You can buy a particular amp, like for example a Line 6 combo amp with all these presets to emulate different amps – Marshalls and Mesa Boogies. When I was growing up, if you didn't have the money for a Marshall, you had an Acme amp. Now there's so much cool stuff out there to choose from. I don't tell anybody they should buy 'this' amp, or 'that' guitar. You want to put as much money as you can into the instruments of course, but not everybody can afford a Les Paul Custom. Buy the best quality you can, with the budget you have to work with. Also, try to find something that's appealing to you; something that you find exciting and is going to make you want to play. There are people who think when they're starting out, they should just buy the Wal Mart guitar, but that's not true. What actually ends up happening is you get something that feels and sounds horrible. It's very uninspiring. You don't really want to play as much. If you have a decent guitar with good action and sound, it's going to make you want to play more often. It's all simple common sense really."