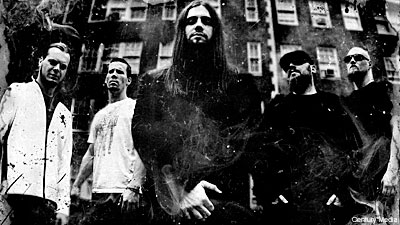 IT'S NO SMALL WORLD: Atlanta, GA's Daath will not be joining Cynic and Dragonforce for the April 15 show at the House Of Blues in Anaheim, California but will rejoin the tour April 17 in Boise, Idaho. In the past the venue, which is owned by the Walt Disney Corporation, has banned other acts including Snot and Machine Head.

As an outpouring of comments and support have been buzzing online about the announcement, guitarist Eyal Levi told Noisecreep, "It's been very very cool to get the support of our fans on this. What's especially refreshing about this situation is that we're also getting support from non-fans. Most people seem to agree that whether or not they like the band, that the metal "ban" affects the entire community. Hopefully it will lead to less people supporting organizations that don't respect or support their lifestyle choices."

PROGRESSIVE TOURING: Confirmed yesterday, Dream Theater will be joining Opeth, Bigelf and Unexpect for the European leg of the "Progressive Nation 2009 Tour". No word on dates and locations just yet, but Europe now has another great tour to look forward to in late 2009.

HARDCORE UNITES IN RICHMOND: This weekend hardcore fans nationwide will be reuniting in Richmond, Virginia for the annual United Blood Fest being held at Alley Katz. With a myriad of artists scheduled to perform such notables include Cold World, Blacklisted, Coliseum, Have Heart and longtime NYHC band Cro Mags. This fest is indeed sold out, but to all those fortunate enough to have a ticket for the fest can someone request "We Gotta Know?" Much appreciated.