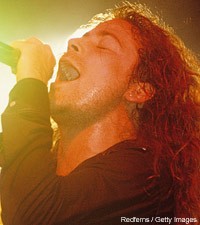 By now, all of the metal community is aware of the drama in the Anthrax camp. After the exit of vocalist John Bush in 2004, the band reunited with former frontman Joey Belladonna. Although the touring they did with him was hugely successful -- especially with stubborn older fans -- things didn't work out, and Belladonna left once again.

In 2007, Anthrax announced that an unknown New York-based vocalist named Dan Nelson would be their new singer. They wrote and recorded a new album called 'Worship Music' and did some tour dates with the new version of the group, but on July 21, 2009, Anthrax's manager announced that Nelson was out of the band. The group had some European dates already booked for August, so things didn't look good.

Luckily for Anthrax, John Bush agreed to come back and play the shows. And the fan response has been overwhelming. There has even been a 'Bring Back Bush' online campaign going, to give you an idea of how loved the guy is. A native of Los Angeles, Bush first hit the metal radar in the early 1980s as the singer for Armored Saint. Critics and fellow musicians have always championed his vocal work, and at one point Metallica even wanted Bush to become their frontman but he surprisingly turned them down. After Belladonna was fired by Anthrax in 1992, they asked Bush to join and they went on to start another chapter in their storied career.

So while we wait to hear if he officially re-joins the band, Noisecreep has compiled a list of 10 essential John Bush era Anthrax songs.

'Only' from the album 'Sound of White Noise' (1993)
If we had to pick one Anthrax song from this era that encapsulated all of the reasons why John Bush was a great fit for the band, 'Only' would be it. The clash of Bush's raspy vocals with Scott Ian's wall of dissonant rhythm guitar makes for a deadly blend of classic metal and post-thrash. If you dig deeper into the song's DNA, you'll even find hints of Killing Joke and Helmetin its off-kilter, yet infectious, nature. James Hetfield once called 'Only' the perfect song, and it's tough to argue with him.

'Room for One More' from the album 'Sound of White Noise' (1993)
The main riff refrain during the verses wouldn't have sounded out of place on one of their 1980s albums, but that's not the only aspect of 'Room for One More' that stylistically ties it to their thrash days. The breakdown after the second chorus has Stormtroopers of Deathwritten all over it. The song has become a staple on tours ever since it made its debut back in 1993. Although recent vocalist Dan Nelson did a solid job of singing it during his short tenure with Anthrax, the Bush version of 'Room for One More' will always be the touchstone.

Room for One More - Anthrax

'Black Lodge' from the album 'Sound of White Noise' (1993)
Over 15 years since it first hit our speakers, 'Black Lodge' still remains the oddest and most haunting song in Anthrax's extensive catalog. Anchored by a trippy, almost psychedelic guitar melody from Dan Spitz and one of Bush's most restrained vocal performances, the track has a cinematic reach in scope and feel. To drive that point home, Angelo Badalamenti, known for his soundtrack work on David Lynch films like 'Blue Velvet' and 'Twin Peaks,' helped compose 'Black Lodge.' Anthrax would never revisit this kind of writing on their later records, but we sure hope they do someday.

'Random Acts of Senseless Violence' from the album 'Stomp 442' (1995)
'Stomp 442,' Anthrax's second album with Bush, packs more metallic punch that its predecessor while maintaining a melodic sheen. 'Random Acts of Senseless Violence' kicks off the record with a high-energy cocktail of stop and go riffs, Charlie Benante's relentless bass drum work and a possessed vocal run. The line in the chorus where Bush sings, 'I see something wrong and I fix it with my hands,' echoes the track's unforgiving musical sentiment.

'Fueled' from the album 'Stomp 442' (1995)
Throughout the years, Anthrax have shown us that they are capable of getting their tech-metal on. But it seems that when they channel their crossover and old-school metal instincts, they are at their best. 'Fueled' is a straightforward thriller with a lean arrangement and instantly memorable hooks. If that wasn't enough to satisfy your metal fix, the last section of the song features a chugging guitar part that sounds like 'Cowboys From Hell'-era Pantera. It gets us all hot and bothered just writing about it!

'King Size' from the album 'Stomp 442' (1995)
Speaking of Pantera, Dimebag Darrell guests on 'King Size,' gracing the track with a firework display of harmonic squeals, tortured notes and dive bombs. At the time, former roadie Paul Crook was laying down all of the leads on the album after Spitz exited the fold, but Dimebag's short run here steals his thunder.

'Catharsis' from the album 'Volume 8: The Threat Is Real' (1998)
Taken from arguably Anthrax's weakest studio album, 'Volume 8: The Threat Is Real,' the song seems shaped by the radio rock of bands like Stone Temple Pilots but it surprisingly works. 'Catharsis' has the same kind of energetic backbeat that drove Life of Agony's fantastic 'Weeds' single, which also flirted with a modern rock sound. Too bad the rest of the album aims for similar territory but fails in quality.

'What Doesn't Die' from the album 'We've Come For You All' (2003)
Either someone in their camp told them or they simply read the backlash online -- but Anthrax turned the metal dial up on 'We've Come For You All.' After the tepid response 'Volume 8' received, this was the kind of move Anthrax needed to make. But it's not just about a band reverting back to the same old moves that got them famous. What Anthrax did on 'We've Come' was inject their songwriting with the wisdom of a veteran act and the hunger of a newer band. 'What Doesn't Die' opens the album and from its punishing arrangement and Bush's vocal work, and one can sense where the rest of the songs are heading.

'Safe Home' from the album 'We've Come For You All' (2003)
Even throughout the group's commercial heyday, Anthrax never wrote the kind of singles that bothered the charts. With 'Safe Home,' the New Yawker's (and one L.A. guy) actually had a chance to change that. By this time in the band's history, they didn't have the major label muscle behind them to push 'Safe Home' onto radio playlists, but the song has all of the hallmarks of a classic metal single. The chorus alone is worth the praise.

'Strap It On' from the album 'We've Come For You All' (2003)
Known by only hardcore Anthrax fans, 'Strap It On' shares its title with Helmet's first album, but its sinister tone makes it sound more like a long lost Accepttrack. The lyrics deal with someone who longs for someone to take them 'back to the heavy time' in their life when things were simpler. The track's stripped down arrangement is the ideal accompaniment for the lyrics, while Bush checks in with one of his most assured performances. Dimebag Darrell also adds a solo to this one, reminding us what an immense loss it has been for heavy metal not having him around anymore.