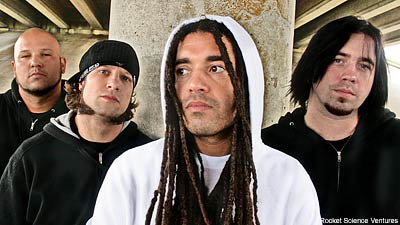 Nonpoint will release a new studio album appropriately called 'Miracle' next month. The band released its first album in 1998 and has endured many ups and downs since that time. Instead of ignoring the negative, the band embraced tribulation and created 'Shadow,' a powerful single for 'Miracle' that pretty much tells the entire Nonpoint story in around three minutes.

"We started writing the song at the very beginning of the recording, which happened to be one of the toughest times in the band's existence," Nonpoint vocalist Elias Soriano tells Noisecreep. "We were in management and label limbo. We had a new guitar player. We felt taxed and worried. Very alone. Then 'Shadow' was born. It tells the story of this band: years of bad decisions, money lost, career uncertainty ... it's been a tough road. But we do everything we can to stay alive. We fight through those storms. And we're still here."

Nonpoint is currently touring with Sevendust.