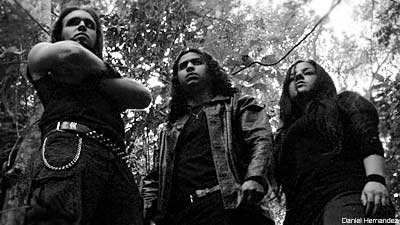 Usually it takes a band a while to get to the point where they can grab a metal legend to join them in the studio. But Venezuelan-grown Noctis Imperium -- that up until recently was a solo studio project of Aeneas Inferno -- got Nick Barker of Dimmu Borgir/Cradle of Filth fame behind the kit through a shot-in-the-dark e-mail. "After trying out and contacting what we thought were some of the best drummers in the local scene, a friend of ours who knew about our situation handed me Barker's e-mail address," Inferno recalls to Noisecreep of how this all came to be.

As it turn out Barker, who has done numerous studio sessions over the years and been a touring drummer for Testament and Exodus, had run into an issue with his visa where he couldn't travel to the U.S., so he was looking for work outside of North America. "I decided to try out and e-mailed him a couple of lines describing our situation, without even thinking he was gonna bother," says Inferno. "I thought he might have had something else to do already, but it turns out that same day I got his reply saying he checked our MySpace page and that we sounded like something he could see himself involved in."

Working with someone of Barker's caliber and experience sets the mood for the studio. "When you're working with a pro, there can't be any mistakes," Inferno admits. "I engineered the album, so working with him basically pushed me to do stuff I wasn't used to. I mean, I knew how to mic a drum kit, but not his drum kit, which is the king of them all," Inferno laughs. "So he gave me lots of tips on things I hadn't have the chance to do before. It also showed me that professional [metal] musicians have their fair share of knowledge on audio related issues, as opposed to the ones I'm used to working with."

While in the studio, Inferno began mentioning to Barker how he always wanted to play the Morbid Angel classic 'Maze of Torment' live. Barker suggested the band record it for the album but ended up running out of time -- but the fire was lit for Inferno. "I kept the idea so the first chance we had, we did it with our then live drummer."

Having Barker add his assassin precision to Noctis Imperium's upcoming release, 'Glorification of Evil: The Age of the Golden Dawn,' was a dream come true for Inferno. "We worked our asses off to make it all happen, and we got the drumming we needed, no doubt about it!"